It was a raining day,the goats and the chickens were in their houses wet, and the gods expressed their emotions as thunders ran from the sky and shook the core of Iya Joke’s hut. The last rain was 3 moons ago, so many people consider this raining as a blessing,but to Iya Joke,its more of a remembrance of sorrow and pain. Her eight year old soon just bade her farewell in his young prime. This was not the first time “Kokumo” is doing this. According to the “Baba alagbo” the native doctor in the area,this is his 4th time of coming and leaving “Iya joke” in pains. He is a special child, well more or less like a phenomenon.

Now his fifth time. He is one you can call an “Abiku”. 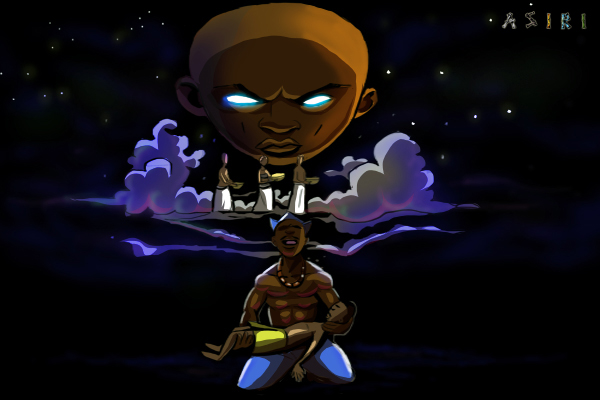 The name “Abiku” which literally means born to die. These are supposed to belong to a fraternity of demons living in woods,especially around and within large Iroko trees; and each one of them coming into the world would have arranged before hand the precise time he will return to his company. Over the years the “Abiku” myth,mystery has formed a large part of oral traditions, stories and have inspired many books and including the “Awa” soap-opera that was popular in the 80’s.

The little demon child, has over the years, lived in trees, forest paths and dwelling around uncommon places, like casted angels from heaven, they run around the earth and heaven and around the world searching for the next womb to enter. Like fallen angels that envy the mortality of humans, the  Abikus want the same thing the humans have, only difference is this, their rascal nature and the oath they’ve sworn to their fraternity won’t allow them to enjoy life.

They are not meant to grown up and become anything in life. The Abikus feeds on sorrow and tears of his/her victim(s), the woman in question won’t be able to tell at birth if the child is an Abiku or not, unless some heavy cuts, or burns are seen on his body. There is a reason pregnant women are told not to walk in the hot scorching sun, walk alone along forest paths, in the dead of the night or go any where without being accompanied. In some cultures, when a woman’s pregnancy reaches its third month,a charmed rag is given to her to be tied around her waist to prevent the Abiku’s from entering her.

Iya joke was in the sixth month of her pregnancy, her husband had gone to the farm, she was left alone with her (two) children and a servant who normally comes from the other village to help her. Akin the deer hunter runs into her house, saying her husband had just slipped from a palm wine tree, nothing serious but he’s hurt. Iya joke stands up, her heart beating fast, she barely wears her blouse and ties her wrapper, mistakenly she forgets to put up her “Charmed pregnancy cord”. Her husband’s life meant the world to her. The sun was at it’s best behaviour that afternoon as she and Akin ran down the bush path to rescue Iya Joke’s husband.

As they approached the bush path towards the area where Baba Joke normally taps for his famous palm wine. They heard noise and people approaching, fortunately it was Ajadi and Ladi helping Baba Joke, he didn’t look that bad, just his left leg. Iya joke thanks the gods that her husband is alive. She rushed to hug him, and they all returned  back home, but this time taking the other route where the “Agba” lies. Agba is the largest and oldest Iroko tree in the entire Mayegun village and environs.

Just a few meters approaching the tree, she felt a pitch inside her tummy, she screams. Her husband looks back and said “Aya mii, are you ok”? she looks up, tiny sweats streaming down her face. She said “am fine olowo ori mii”… Well only if she knew, the journey has only begun. The Abiku is at home.

At birth, the Abiku’s are healthy promising and alive, until when they get to a certain age and they start exhibiting sickness, this happens till they die. They want power and attention and they have it, the Abiku’s don’t have regards for herbalists, pastors or alfas.. there is a saying in yoruba that goes “Abiku so o’logun di eke” meaning Abiku turns the native man into a liar. Rendering all charms useless,this angers the herbalist who goes away in anger.

But if detected early, the Abiku child is given what it wants. Periodical feasts are usually made for these children of which beans and a liberal quantity of palm oil must form a principal portion of this dish. To this children of their age and others are invited, and their company of demons(Other Abikus) although not seen by the ordinary eyes are present to enjoy the  feast. This is suppose to appease them and reconcile them to have a permanent stay on earth. 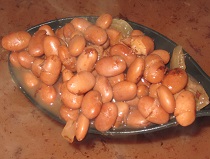 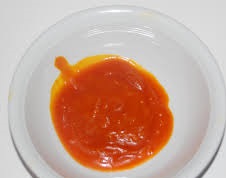 But if they fail to stay and the child suddenly dies without warnings or care, the herbalist that buries the child makes sure he mutilates the body of the dead child to put an end to its vicious cycle of pain and sorrow; even though the stubborn ones most times return with the very same marks.

Children like these, known as “Abikus”are given weird names different from other names given to other children.

Such are the names:

Kosoko- There is no hoe to dig the grave

Bankoko-Sit down or stay with me

Jekiniyin-Let me have a bit of respect

Apara-One who comes and goes.

Igbekoyi-Even the bush wont accept this

Duro-ori-ike-Wait and see how you will be petted.

Iya joke gave birth to a bouncing baby boy on a market day, it was a day of joy for the whole family and the entire village at large. Baba Joke and his clan of palm-wine tappers came in and brought in the freshest wine for the people, Akin came with the largest meat. It was a great day, unknowing to them the time clock for the new baby had just begun ticking.

Named Kokumo at birth, he was the envy of every mother in the village, not until the age of six when he went into a state of off and on sickness this lasted for two moons, and on that raining afternoon his mates came for him. Its time to leave his family and go and meet his mates in the woods, even the great village native doctor couldn’t stop him. His time is done.

Over the years,the mystery behind the “Abiku’s” have formed basis of great poems, dramas and plays and more also a trend based on superstitious and oral traditions.

Are there any such things as “Abikus”? or is it just a case of diseases and hereditary traits, that are the true causes of infantile mortality.

What do you think? 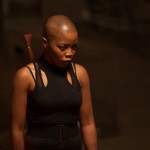 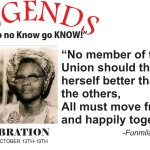