This is one of the oldest folklore in Yoruba land, so old that this story has become a yard stick in teaching moral lessons, quick thinking, intelligence and wit over the years. However, there is this other side of the story while as kids, we paid rapt attention to the storyteller. There was always this sense of reality to every story we were told however fictitious they might sound at the present and this particular Ìjàpá story was one of a kind I hold true to my innocent heart.

Many year ago, Eledumare the supreme God blessed the animal kingdom with incredible powers to walk,talk, and act like humans. Though the line between humans and animals is thin, there are stories of animals with human powers, of animals shape-shifting into human beings and vice versa.

In the village of Àjété, a peaceful and quite village, the people were known to be honest to a fault. They were so honest that when strangers visited their market on every Ojo Aje, they could afford to leave their wares and go to anywhere and when they would come back from their strolls, they would find money placed on their basin or other items by the Aje people who have sold the goods. One day, a lady cooked fresh fish pepper-soup in a big pot and left her door wide open.The inviting smell of the soup spread around disturbing her neighbors,even ,made a long-throat palm wine tapper fall off the palm tree,but no one went into the house to steal or even look at the simmering pot of soup. That was how peaceful and honest the people of Àjété were that the humans, animals and the various gods respected the prevailing ethics for peaceful coexistence.

One sunny Saturday afternoon, Ìjàpá (the cunning shelled creature) strolled into the village. He had been banished from a neighboring village because of his devious and dishonest behaviors. The people of Àjété not knowing who Ijapa was, accepted him on the basis of the long deceitful and pitiful story he told them. They sympathized with him and allowed him into the community.

The following two weeks was peaceful. Ìjàpá was everybody’s best friend. He was so jovial and caring that he would walk to your house and ask if you needed to eat something, then he would cook for you,feed you and leave with the rest of the food. Not everyone observed his tricks and this went on for a very long time until one day, the people started realizing that many things were missing in their homes and entire community.Everyone got worried.

One day,the people of Àjété  went to the Oba’s palace and all laid their complaints to him. The Oba who was quite a diplomat didn’t want any form of unrest because it was just 5 days to the New Yam Festival. But as soon as the people left, he consulted his chiefs and all the Babaláwos. He told them to make sure they find the culprit who’s been sneaking around stealing people’s belongings.

The Babaláwo of Àjété  town was rich in divine wisdom albeit he possessed some dangerous superpower, he still preferred using wisdom through dialogue in resolving pressing issues. There was this rumor flying about that he could change into a snake, an antelope or a cat, moving from the animal world to the human’s and even venturing into the land of the spirits to commune with those Ebora at the 7th realm. No one could put a claim to these stories, mothers even used the story to frighten their kids at the time.

Since it’s just 5 days to the New Yam Festival as customs had it, the first yam to be used for the festival came from the babalawo’s farm and he had taking good care of his farm in making sure it came out big enough,robust and fresh as usual. So,he went to his farm four days to the festival and found that someone had stolen from his barn. He screamed in outrage “Who on earth is stealing from my farm?” He could only hear his echoed voice repeat the rhetorical question.

All the while, Ijapa had been living off other people’s food. He was now looking fresh, robust and would walk around the village as if he’s the new Oba though there had been muted reports saying he’s been seen crawling in the night with load on his head,or sneaking into someone’s kitchen. No one confronted him with the rumor.

The worried Babaláwo went to see the Oba and narrated what he noticed was happening to his barn. In utter shock, the Oba wondered who could have mustered such rare guts not withstanding that the entire villagers dreaded the spiritual powers of the Babaláwo . Who could have robbed my chief Babaláwo ? He reasoned! Then suddenly, the Oba cried out “ I know what to do”. The Babaláwo  jumped and replied “kabiyesi,what is it?” I know what we can do to catch the thief disturbing our village with his or her shameful habit. The Oba said. Come closer, let me tell you. So, the Babalowo leaned over as the Oba whispered into his ears the secret plan. Once he understood what the Oba said,he rushed down to his house and started working on the plan.

Two days to the Yam Festival, Ìjàpá on his regular mission of going to the Babaláwo’s farm to take his last set of yams before the festival, was surprised when he got there and saw a man standing in the middle of the farm. Surprised he is not the only one that has been stealing from the farm, he asked the ‘man’ “What are you doing here“?.When the man didn’t answer him, he was very angry.”I will slap you oooo”. The man didn’t still reply him. So, he slapped him and his hand got stuck in the man’s right cheek.”Ohhh you think you’re smart abi? I will slap you with my other hand now”. He landed a heavy slap on the other cheek and also got his other hand stuck. Ijapa, now so furious, was determined to deal with this strange man. “Ohhhhhh! Okay! So, you think you’re a tough man, abi? if i kick you with my powerful right leg,you will just die oooo”. He warned with a bit of tremor in the voice. It wasn’t long when his two legs similarly got glued to the strange man’s body.He was like a baby strapped to the back

Terrified, beads of sweat streamed down his callus face. It was at this moment he started calling for help but no one seemed to answer him because it was in the middle of the night and the mosquitoes and starving farm bugs were already at hand to feast on his body.By 6am, Ìjàpá knew his game was,He started singing, soliciting help from anyone who cares to help find the Babaláwo to come and save him. The song goes thus:

Hours later, first, it was the people going to the stream that saw Ìjàpá stuck to the Shigidi. They ran and called the Babaláwo who then summoned the entire village including the Oba to see the face of the mysterious thief polluting the village of Àjété.He was left there on the Shigidi for 5 days and after the Yam Festival, he was released and banished from the village. He left Àjété looking depressed with insect bites noticeable all over his body. For days, he trekked alone and finally got to another village. When the people of the village saw him,he told them he was attacked by armed bandits and he lost all he had in the process.He was pitied once again and allowed entry into the village. Ìjàpá’s second voyage will be told in our next episode. 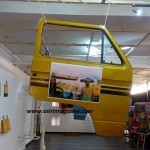 PHOTOS: “They Have Asked Us To Smile” Exhibition at... 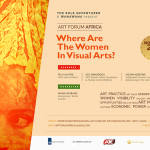 Art Forum Africa Presents “Where Are The Women In...