Meet the Artist: The Art and Act of Abolore Sobayo

Abolore Sobayo is a man of many parts, painting, politics and fashion. He trained as fine artist at Yaba College of Technology, and his paintings have won critical acclaim. In 2006, he was the runner up at the Nigerian Fashion Show. And when he ventured into politics, he was elected to represent Ogunoloko Ward in Oshodi/Isolo Local Government Area. 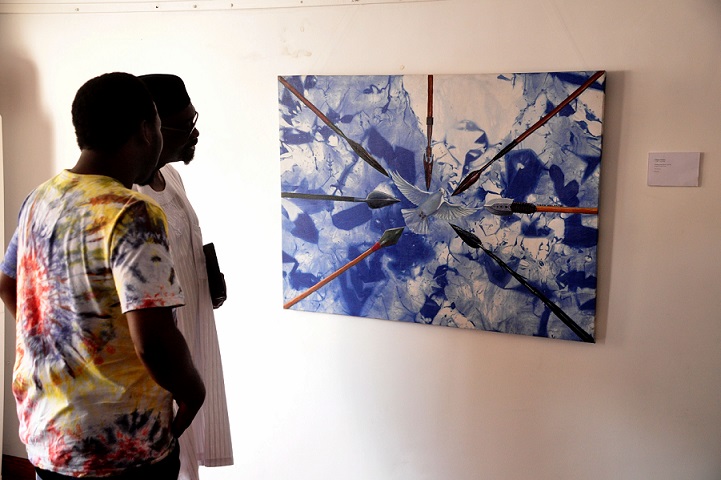 Now,lets take a look at some of his amazing works that was featured at his just recently concluded Exhibition ‘a room for three‘ at the Red Door Gallery in Lagos.

In Akobi, Mr. Sobayo tries to capture the place of the firstborn in African culture. A child backing another child depicts the weight of responsibilities a first born has to bear. Firstborns are looked upon as role models by other siblings. 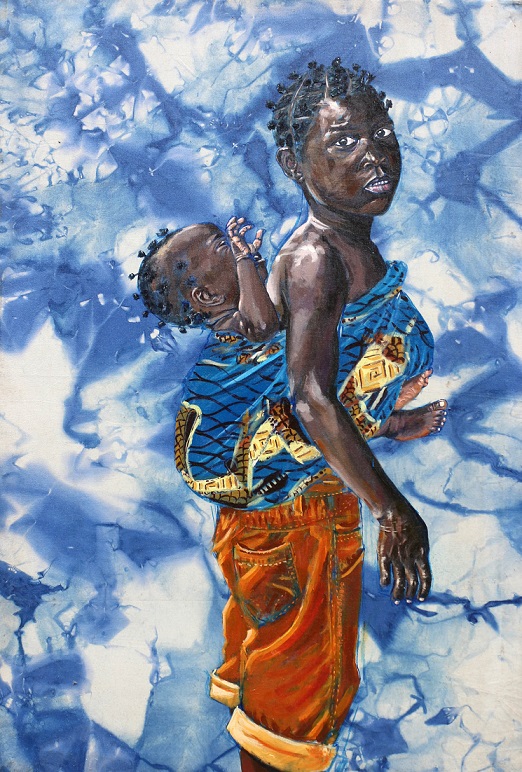 In Endangered Species, Mr. Sobayo draws our attention to the chaotic state of the world. The globally acceptable symbol of peace is the dove. In spiritual matters and connotations, the dove has been used in one way or the other to represent peace and to show how for a society to progress, peace is inevitable.

The dove, the metaphor for peace, in the middle of the canvas, is the target of destructive weapons. This depicts how, all over the world, peace has been subjected to threatening negative factors such as rebellion, war, violence, crisis, conflicts, terrorism, insurgency, etc. In this painting, Abolore’s Sobayo’s combines his trademark of marbling white and blue to great effect. The background of marbled of white and blue is the sky where the dove is supposed to fly unhindered, but which has now become an unsafe haven. What with sustained industrial/technological/mechanical pollution and emerging mechanical and man-made air crashes? 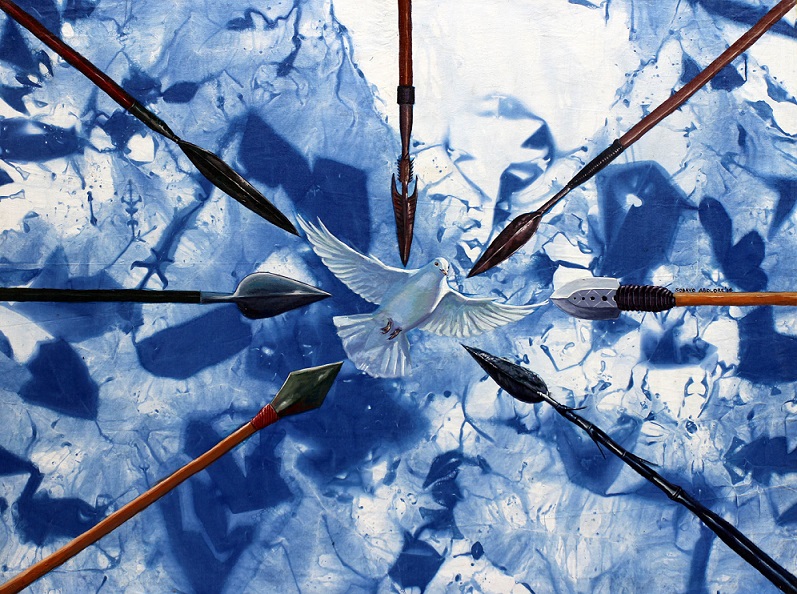 Ebute: When the canoe gallivants and navigates through the wavy roads on the waters, it sooner or later, returns to Ebute (the shore). Again, the shore is a resplendent sight in Lagos, being the state of aquatic splendor. A conglomeration of stagnating canoes addresses a theme of commonplace, which in common metaphorical reinforcement presupposes that life itself is like a shore. Everything remains stagnant until paddling is actuated. 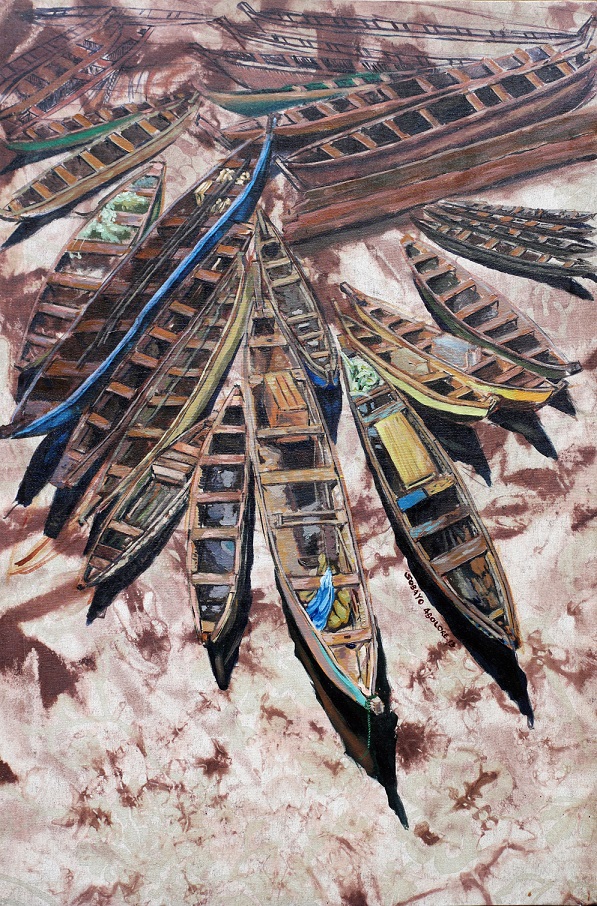 Oracle;In Oracle, Abolore Sobayo demonstrates where his politics meets his painting. In Yoruba land, the oracle is the supreme divinity consulted on all matters of importance, such as choosing and crowning a new king. However, in present day Nigeria, this is a role powerful and influential people play.

When describing his inspiration for the painting, Mr. Sobayo said, ‘‘the first time I heard a man being referred to as an ‘Oracle’ was around 2010 (before I became active in politics), and I felt that it was an exaggerated comparison (was rare and quite impossible), that the thought behind its contextual usage was deep. I was to be proven wrong with the events that unfolded years later, as the man Asiwaju Bola Ahmed Tinubu has succeeded in making history as the first opposition leader in Nigeria to beat a sitting government at the polls, and has now become an entity who is consulted on national matters.’’ 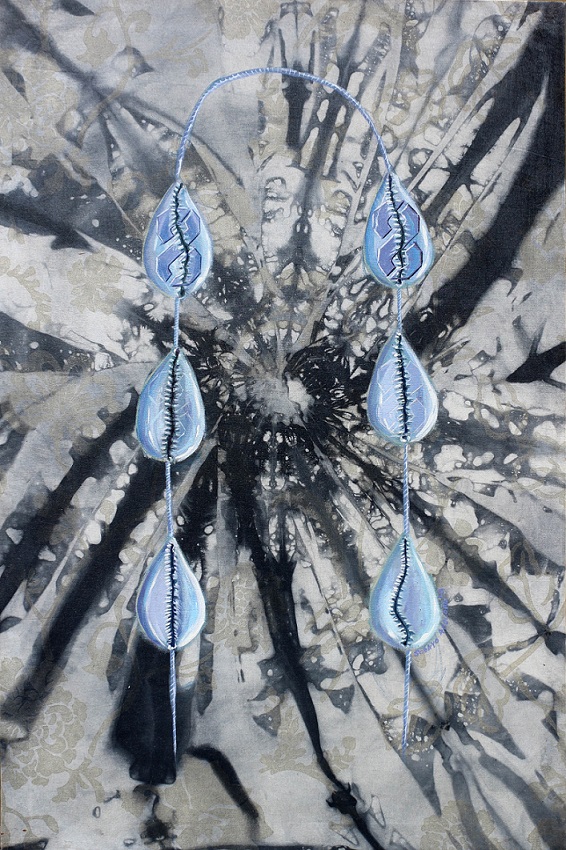 Meet The Artist, News, Trending Meet the Artist: The Art and Act of Abolore Sobayo