The Mystical Side of Iyoba Idia

Esigie’s reign lasted from about 1501 to 1555. During the reign of Oba Esigie in 1504 He added Idah a neighbouring ‘state’ lying between Benin and Benue to the empire. The Oba like all his predecessors sent his mother to reside at lower Uselu and called her the Iyoba of Uselu. In 1515, there was a war between the Idah and Benin (Edo) people, they wanted to reclaim their land, so Oba Esigie and Queen Idia went to war. It was a shocking surprise because it had never happened before in the history of Benin kingdom as the Queen mother offered to go to the war front. Idia came to the palace fortified with her medicinal knowledge and magical powers as her war dress for the 1515-16 Idah battle. According to the royal bards, on her head was a distinctive coral war crown peculiar to her alone. Resting on her forehead was “ugbe na beghe ode, eirhu’ omwan aro,” a charm with four cowries that ensured any oncoming stone or missile will not blind her. On the back of her head was “iyeke ebe z’ukpe,” the charm known as boomerang. On her neck was “iri okina” (precaution rope) with four leopard teeth tied to it. The rope reminded her to be careful and to avoid danger. On her chest was “ukugbavan” (a day belt) designed to ensure that whatever the nature of the problem dawn will always come. Hidden under it was “uugba igheghan odin,” the belt of dumb bells used to hypnotize her enemies while her “ukugba igheghan” (the belt of bells) jingled to frighten enemies.
Because of the nature of warfare in that historical period and the difficulty of setting up a camp to cook, it was crucial for Idia to have “ukugba ohanmwen,” a hunger protector that prevented her from feeling hungry. Underneath her loin cloth was the twin medicines. The first was, “aidede okherhe vb’igban” (you don’t embrace a young oil palm tree full of thorns) that erected a psychic barrier to prevent enemies from daring her; and the second was “atete iwi y ogho” (a traditional tray never gets lost while being used for hawking) that guaranteed her safe return. All of the enumerated medicinal items were propped by “ukugba ason” (the sacred belt of the night witches) to accord her victory over enemies. Mystics were aware that unless the forces of the night ruled in one’s favour, one will never win. The various packets of charms were sewn, hooked and fastened to the war dress made from the full skin of a mature leopard with the head, fore and hind legs completely intact to make her invincible to accident and defeat, and also to scare enemies away. Two “agbada” (daggers) hung in their sheaths on the two sides of her hips. She had three “ifenmwen obi” (amulets) and poisonous arrows on her left arm known as “ebei k’awe y’ uhun erhan” (danger never meets the Awe bird while perching on a tree). On her right hand is the “etebetebe” (the war sword) and a charm seized from an herbalist sent by the Attah (king) of Idah to spy is on her left hand. 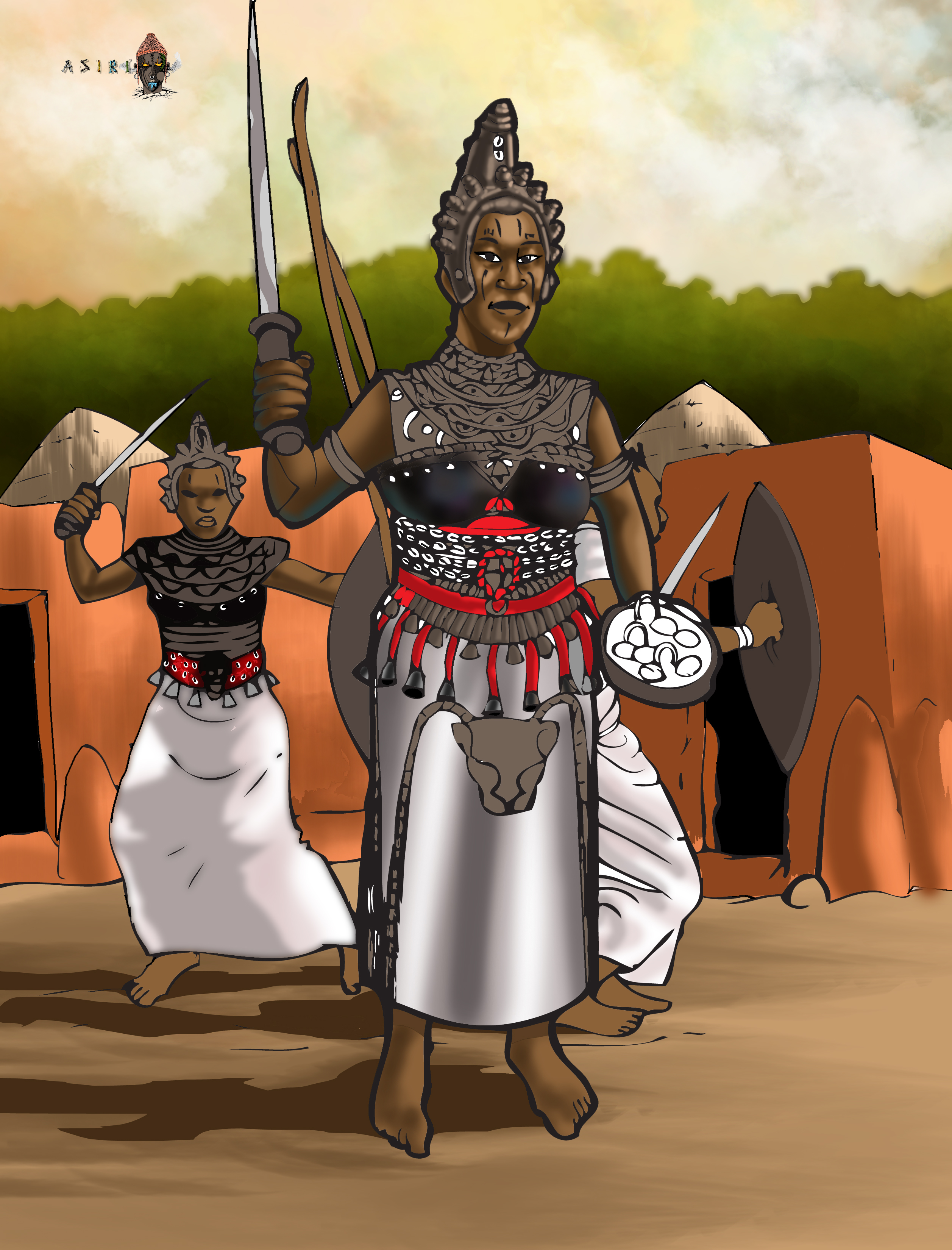 Iyoba Idia went to war as Iyoba and a general; not as a woman! As the grand protector of the kingdom, Idia’s powers were particularly crucial during the major military challenge Esigie faced as a new Oba. The Idah army was on its way to the capital. The previous battles which the Benin soldiers fought in, had left behind a fragmented army and dispirited Benin soldiers. Matters were not helped when the ibis, conceived as a bird of prophesy, flew over the soldiers marching to battle shrieking and flapping its wings. The rattled royal diviners predicted military disaster and urged retreat, but the resolute Idia used her strength and reputation in supernatural powers and neutralized their prediction of doom. Closely heeding the counsel of his mother who was on the battlefield with her own army, Esigie (probably Idia) ordered the bird to be shot. Fortified by her powerful presence, and at her urging, Esigie rallied his dispirited soldiers to a victorious battle.
According to A.F.C Ryder, the information Idia gained from her visionary insight and supernatural powers enabled her to offer better political counsel, to amplify Esigie’s omniscient and omnipotent qualities, to enhance the awesomeness of his divinity, and to make his reign much more outstanding. Where his warrior father, Oba Ozolua was unsure about trade with the Portuguese, Esigie, (he also schooled in a Portuguese missionary school, he was well educated) the political strategist, was comfortable with expanding Benin’s trade with the Portuguese having been taught by them. He confidently defined the terms of external trade to suit Benin’s national and imperial objectives, rebuffing Portuguese demands for slaves, by limiting its export, this act alone proves just how intelligent the Oba was, and he indeed took after his mother Iye-Oba or IyaOba (Queen mother).
The title ‘Iye-Oba’ or as it is popularly known ‘Iyoba’ was bestowed upon her by her son Oba Esigie, the first ever to bear such title and office. The office of Iyoba defines a position of supreme moral authority and power. Officially, the occupant of the office was the Supreme Mother of the nation as well as the political mother of the Oba, which in turn means she had acquired the highest form of authority in the kingdom, her desire for power, her ambition was achieved.
Esigie’s affection for his mother was unabashedly strong, and he must have been devastated by her death. The ivory tusks and masks he commissioned to immortalize her speak eloquently to this depth of emotion. She was the pillar of his administration, and before she died, she remained a close confidant and political strategist. This also portrays a mother’s love, she had the purest love for her son, she’d do anything for the success of her son and He trusted her completely. An epic tale of a mother and son’s love. 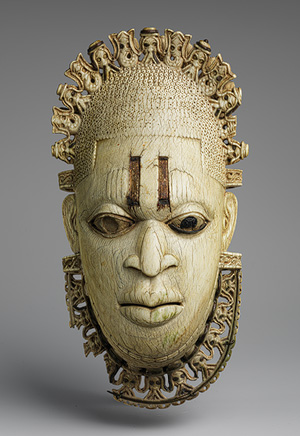 The Mystical Side of Iyoba Idia 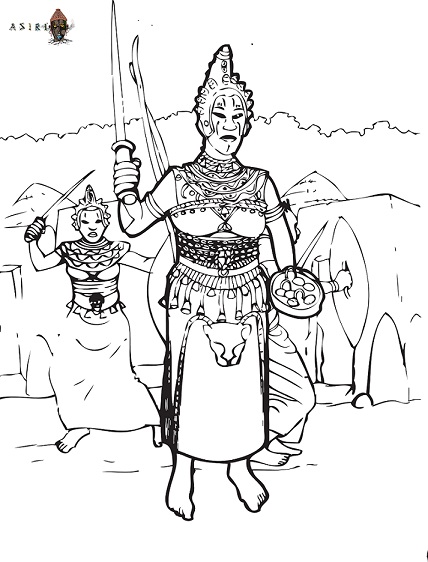 By the time she died, probably by the end of the first quarter of the sixteenth century, she had substantially altered Benin’s dynastic history as well as defined its course of history. For one, the victory over Idah not only eliminated it as a potential threat, but it also enabled Benin to gain and consolidate its imperial advantage in the north-south Niger river trade route that stretched all the way to the commercial centres of the Songhai empire and to the Atlantic ocean (as trade during that period was a major source of income and power for African kingdoms). Secondly, she promoted and fought relentlessly to wrest the Obaship for Osawe (the personal name of Oba Esigie), an action that allowed Benin to reach its apogee. Before Esigie gained control of the imperial administration, and even after, she was the major power behind the throne. Finally, the establishment of the institution of Iyoba (Mother of the Oba) not only provided power to royal mothers in the running of the kingdom, but ultimately shifted the longstanding administrative protocol that conferred power to females from daughters, who are of royal blood, to wives, who are non-royals.

Queen Idia’s social and cultural accomplishments such as her invention of the Ekassa dance for Royal funerals and the creation of the Ukpe Okhue / parrot becks Iyoba’s cap, Politically she has also been credited for using her knowledge of  supernatural powers, magic and the occult to seize the throne of Benin for her son and defeat his entire enemies. The yearly Orhue festival dramatized the sacrificial food offering she made to help her son Oba Esigie. Idia is an extraordinarily powerful personality even after death, She is praised and adorned for “fighting with a double edged sword” which in other words can be translated as her ability to fight battles both in the physical and spiritual realm and she is praised continuously for being the womb of Orhue which means; Because she was a mother who gave birth to a son, who dramatically but not accidentally became the Oba of Benin, also this child created her pathway to ultimate power and here lies the exquisite uniqueness of her womb, a womb that produced a strong willed intelligent and meticulous child, that in turn fortified her ambition to achieve ultimate power, defiled all odds, halted the execution of the mothers of Oba’s and radically the Benin empire.
Despite all these brave acts of hers, we are still not sure the audacity and far reaching nature of her entire achievements, But she is one of the smartest woman ever, who against all odds, norms , culture or ‘taboos’ went all out to achieve all she ever dreamt of. Even in death she has been immortalised in the hearts of many. A testimony of the enduring power of Idia’s political influence is that a replica of Queen Idia’s ivory mask continues to be worn by the reigning Oba during the main annual re-dedication ceremonies. It is said that of the two strings of ivory pendants are worn during the Igue festival and for the Emobo ceremony, one is the ivory pendant of the face of the Iyoba. The fact that the spirit of Idia, expressed through this pendant, still looms large over contemporary royal rites, this goes far to show the importance of Queen Idia(even in death).
Queen Idia’s mask was chosen as the emblem for the Second Black Festival of Arts and Culture, known as FESTAC ’77, that Nigeria hosted in 1977 and it became famous.
The first ivory mask made in memory of the Queen, the one Oba Esigie commanded to be made, lies in the British museum as a result of the British expedition that occurred in 1897 which gave rise to and I dare say the unfair looting of the ivory, bronze figurines and art works of the Benin kingdom. We look forward to the day these sacred figurines return home to where they belong.
Queen Idia is without doubt the most celebrated Heroine in African History.

Folktales,myths & Legends, Reviews, Trending The Mystical Side of Iyoba Idia

Art Forum Africa Presents “Where Are The Women In...