In ancient times, in Yoruba land, spirits, animals, and human beings inhabited a common world. In those days, stories abound of animals taking on the form of man to enable them visit human villages. What attracted them most about these villages were the maidens who lived in them. Indeed, it was generally agreed that Yoruba women were so beautiful because Oludumare created them first. So, usually, when the spirits or animals visit a village they find unsuspecting spouses to get married to. Sometimes marital life proves too blissful that they forget to return to their world or return occasionally to assuage the feelings of their spirit-families.

This was a common occurrence, but in the world of men it was known only to the priests, herbalists, and spiritual heads. But what they did not know, was that even among their most trusted circles, lived men and women who were part animals, part spirits, and part human.

In the village of Ajasa lived the most beautiful woman known to man or spirit. What made Ọlájùmọ̀kẹ́’s beauty so peculiar was that blind men frequently gained their sight when they met with her. Her parents tried very hard to teach her to be humble and to respect others, but their efforts were in vain. Jùmọ̀kẹ́ carried her beauty on her head like a calabash for all to see. It made her rude and arrogant that her parents feared no man would take her for a wife.

There was no reason to fear. Eligible bachelors, warriors, chiefs, princes and even the Baale flocked to their compound to ask for their daughter’s hand in marriage. But Jumoke rejected them all. She told her Maami, that no man in the whole of Ajasa was good enough for her.

When the news of her refusal to take a man from Ajasa got around, suitors from neighbouring villages travelled down to seek Jumoke’s hand in marriage, but she turned all of them down.

And she tended to turn her suitors down in style. She poured cold water on suitors who were tall, hot water on short suitors, and cut both the rich and poor ones to size with her tongue. Every day, a man ran out of her father’s compound tail between his legs, in shame.

Olakunle, a handsome, hardworking but poor man was one of such men. Kunle’s family lived in the compound next to Jumoke’s, so they grew up together as childhood friends. Kunle harboured hopes that he would one day succeed and win Olajumoke’s heart, because she was friendlier to him than to any other man. Yet she would not marry him because he was poor.

Every evening the sun sets, Kunle brought food and fresh meat to the house of his beloved. She would collect the gifts and send the poor man on his way. But rather than be deterred Kunle loved her all the more, believing his love would eventually soften Jumoke’s heart made of stone. But unknown to him, something was about to happen that would change Jumoke’s life, and change the common world that men and spirits inhabited forever.

One sunny afternoon, Jumoke was walking around the edge of the mysterious Akeke forest when she came across a very fair and handsome man. His skin was as smooth as oil, his face as dashing as the early morning sun. Jumoke was captivated by his good looks, never had seen man or woman who looked almost as beautiful as herself.

To her surprise, when she got close to the man, he just walked passed her without looking at her. No man alive had ever walked pass her without noticing her before. She turned and said:

“Young man didn’t you see me as you walked pass?”

Still she received no answer.

The man kept on walking. She repeated the question, and got a reply.

‘I apologise fair maiden, but I am on a very important mission to a distant village and didn’t want to be a bother.’’

The handsome man introduced himself as Ori. And that was how Ori and Jumoke became friends.

Ori proposed and Jumoke immediately agreed to marry him, despite the protestation of her parents. Her parents feared that nobody knew or have heard of Ori’s family, but Jumoke would not listen. Eventually, they got married and for a while lived in the village of Ajasa happily.

But Jumoke’s curiosity began to grow and she longed to know where her husband came from. One day, she sulked and sulked until Ori told her: 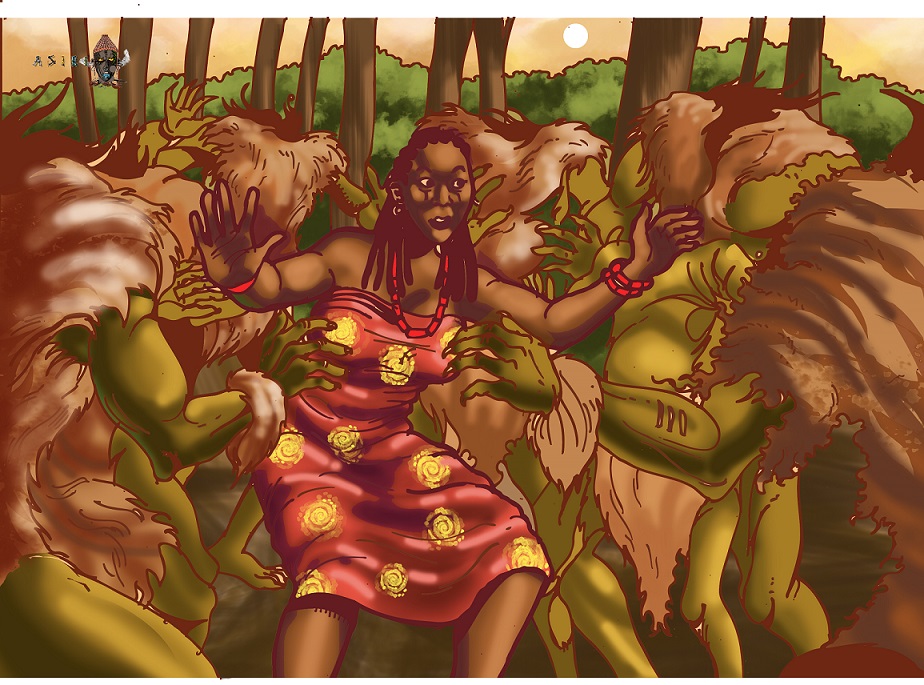 Olajumoke trapped in the land of the spirits

“I come from a very far kingdom from here. Don’t worry about it, someday you will understand”.

This answer only succeeded in infuriating our fair maiden that she sulked and pestered her husband even more. Ori relented, and decided to take her to his village.

And the fateful morning he changed his mind and said he would go alone. Of course, his wife would not hear of it. All his warning fell on deaf ears. Wherever he went, Jumoke followed. When he got to entrance of the forbidden Akeke forest Ori dropped his hands. Jumoke when she recovered from her shock demanded to know why. Her husband answered that he borrowed it and had to return it. And at different stops he dropped another part of his body on the road. Until in his bride realized that his entire body was composed of borrowed body parts.

Then he began to sing:

Ori has no head ,Olajumoke is leaving

Ori has no arm,Olujumoke is leaving

Ori has no leg,Olajumoke is leaving

Ori has no body,Olajumoke is leaving 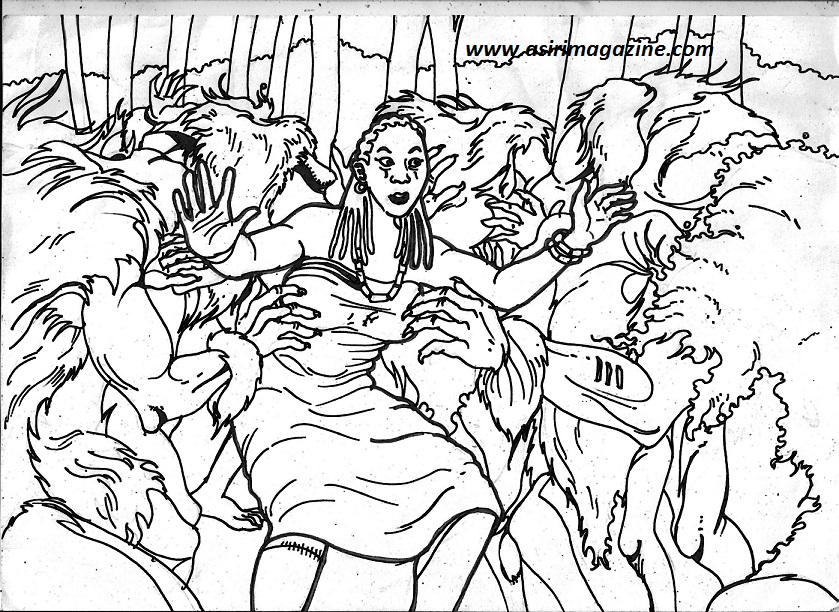 After returning all his body parts at different junctions where he borrowed them, what remained was his head. And by this time he had gotten to his village, in the land of the spirits.

His head floated with no body, in village where the spirits had only heads. As soon as Ọlájùmọ̀kẹ́ saw this she screamed and tried to run back to human village, but could not as spirits made of only heads swooped on her and took all her body parts.