WSICE 2018: The International Dimension and Gains

The success of the 2018 edition of the Open Door Series/Wole Soyinka International Cultural Exchange is due largely to the huge number of human resources that participated in the various event items. Aside the 84 student-finalists that,on Friday July 13, wrote the annual essay competition on the theme “The Pursuit of Truth: Lies & The National Psyche,” there were 1000 students mobilised from about 10 schools around Abeokuta, and who featured in the Creative Workshop and Mentoring  events on Saturday July 14. 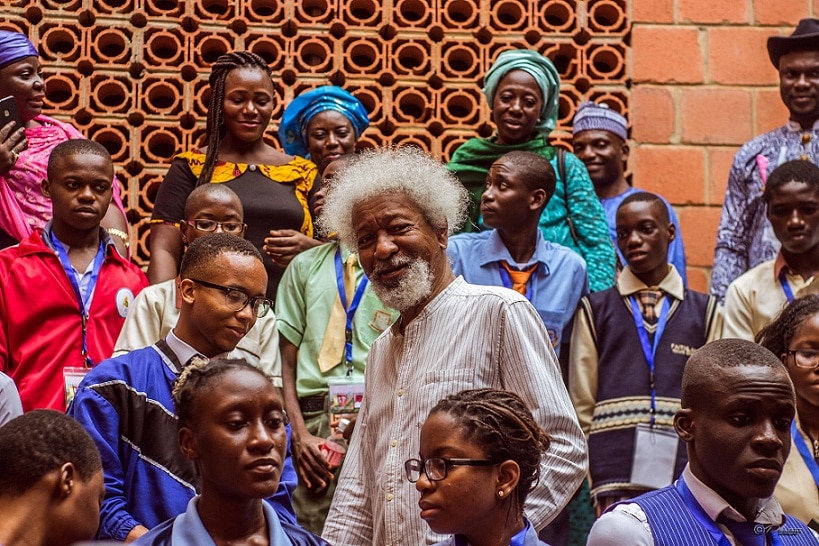 But the icing were the international guests that also took part in all the events. These guests ensured that the project stayed committed to its global cause.

A three-man delegation led by the Co-Executive Producer of the project, Professor Segun Ojewuyi, ensured this global dimension. Theatre director and culture scholar, Ojewuyi, head of directing at the Southern Illinois University (SIU) Carbondale USA, is the founder of the GlobalNewHaven, the partner organisation (with ZMirage Multimedia Company) in the founding of the OpenDoorSeries/WSICE. 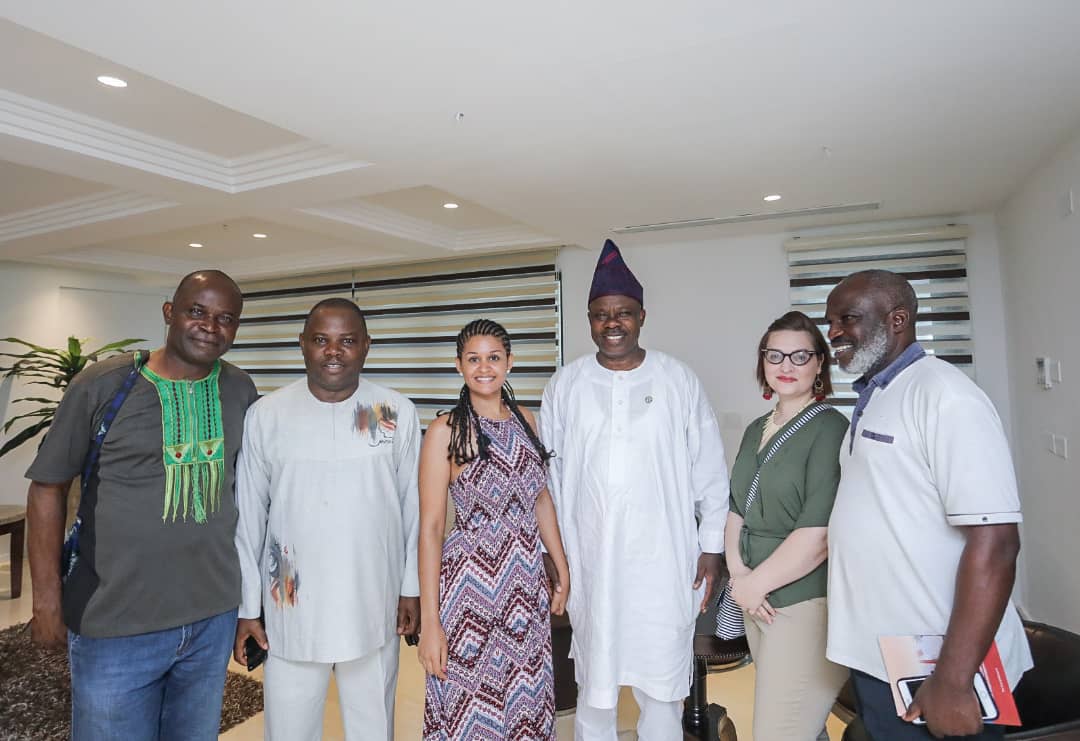 The Guests with the Executive Producers, Kareem and Segun Ojewuyi and the Project Executive Consultatnt, Anikulapo with Gov Amosun at his GRA residence in Ibara on Sunday, July 15.

In the team are two ladies with equally impressive credentials in the arts, especially the performing arts: Sussan Harrocks and Baretta Chullen

The two guests were visible and very active in the various events, and took generous time out to interact with the student-participants, holding mentoring sessions and giving them a well rounded perspectives on the importance of education and responsible citizenship. The visibly elated guests also interacted with the various dignitaries that attended the events including the entertainment-celebrity commissioner for Information and Strategy of Ogun, Otunba DayoAdeneye (aka D1); the Deputy Governor Chief (Mrs) Yetunde Onanuga, who was guest of honour at the July 14 mentoring session held in the amphitheatre in the basement of Soyinka’s A.R.I home deep in the forest of Ijegba, and the Nobel laureate, Wole Soyinka, whose life and illustrious career is the motivation behind the project.  On July 15, the guests also had opportunity to meet with the primal host of the event, the Governor of Ogun State, Senator IbikunleAmosun, who expressed delight at hosting them in “our humble state of cultural splendour.” 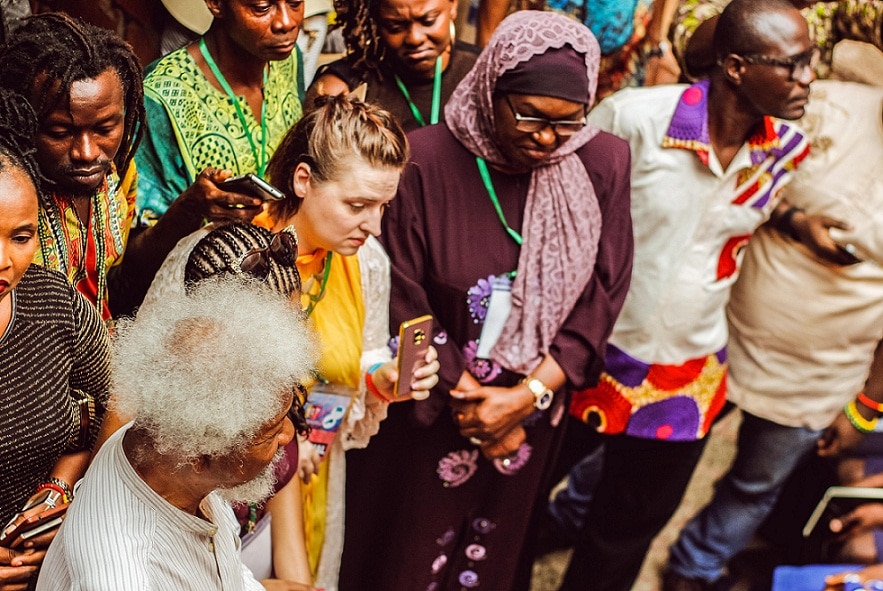 In one if the sessions, Susan, a very well experienced performing artist and veteran of the United States Military, told the young ones to take their education seriously as this is the passport to a greater future. She encouraged them to be patriotic, to love their nation and be ready to offer sacrifices to her, in spite of the odds that the nation and its political elites and their sometimes inconsiderate policies,  may throw their direction. She said she decided to join the US military as a way of serving her country, America, despite the fact that the country has not been able to give her everything she desires.

Baretta Chullen, though a fresh graduate of the Southern Illinois University, is also an experienced actor and theatre producer. Emphasising her African-American heritage, she said stepping into African soil for the first time, she felt highly inspired by the warmth of “my brothers and sisters” from the motherland. She wondered why many young Africans desire to take life-threatening and sometimes fatal risks to migrate to the West, when indeed they have a “beautiful land and warm people” in Africa. She thus advised the young ones to work hard to find space for their individual dreams “here on the continent”, but importantly to know that education is indeed, the only means to freedom and great future.

Before they departed Abeokuta, the visitors had opportunity to visit historical and heritage landmarks in the state, such as the famous Itoku Market (market of the popular Adiire terxtile cloth) and the world-famous Olumo Rocks Tourism site. Before Abeokuta, the guests had visited the National theatre of Nigeria and the Afrikan Shrine in Lagos. After Abeokuta, they proceeded to Osun State, where they visited the famous Osun Osogbo shrine and as well paid courtesy visit to the OoniAdewusi of Ile Ife, among other activities. The visitors are expected to jet out to Accra Ghana this week, before returning to base in the US.

Since inception, the Open Door Series/Wole Soyinka International Cultural Exchange has always emphasised the global dimension of its objectives. And this is simply premised on the fact that the force vitale behind the project, Oluwole Akinwande Soyinka, is a quintessential artist and cultural icon whose accomplishments transcend his place and continent of birth.  A global citizen whose work and impact as an advocate for the greatness of humanity, Soyinka operates across spaces and boundaries, hence the character of the project designed to honour him.

The first edition in 2010, WSICE76, featured two theatrical productions that were presented. One was Preemptive, written by the US-based Professor Niyi Coker (Jnr)of the University of Missouri St. Louis; and “Seven”, by Racheal Hastings, written by then an graduate student of SIU, Carbondale, USA.  Featuring in the cast are: Christopher Collins, Rachel Hastings, Tania Dawn Coambs, Basha Sharone Evans, Cortez Johnson, Racquel McKenzie.

In 2011, the WSICE77 edition presented Samm Art Williams’ Home as directed by Ojewuyi, and featured a mixed cast from the US, UK and Nigeria, with the renowned Nigerian dance artiste, Peter Badejo (OBE), then based in the United Kingdom, conducting a dance workshop. The Essay segment brought two international students: Olumayokun Ogunde and Ukachi Chibueze to participate join 75 other students here. The Advocacy segment saw Robert Fox, a professor of English at the SIU, Carbondale speaking on “From Tigritude to Transcedence: the Conscience and Conscientiousness of Wole Soyinka”.

The second phase of the edition featured a Blues Tea Partyheld at the Africa Centre in London, and anchored by Stanley Amah, a Nigerian lawyer based in London. There was also a debate session that featured mostly Africa students selected from schools around the UK. The First Lady of Ogun State, a constant and consistent supporter of the project, Mentored the London students participants onthe need to identify with motherland Africa. She urged the young ones to always insist on the parents to bring them back home regularly, so they do do not forget their origin and heritage.

Other past editions and their features were:

WS80: The legendary Jamaican poet, Mutabaruka and the fiery American performancepoet,  Javon Johnson performed in Lagos and Abeokuta, and as well held workshops with young Nigerian poets and students.

WS81 in 2014 presented the famous storyteller and African culture activist, Aunty Thea mentoring students in Abeokuta on the art of story telling.

SUSAN HARROCKS :The newly elected President of The Stage Company, having previously served as the VP of Productions, Susan is a member of the Unrehearsed Shakespeare Company of Chicago, as well as Stone Soup Shakespeare. A founding member of Three Grace’s theater, she has worked to bring classic productions to rural and underserved communities in the mid west. Directing credits include Godspell, The Hobbit, Arsenic and Old Lace, and ‘Night Mother. Previous acting credits include Maggie in Cat on a Hot Tin Roof, Lady Macbeth in Macbeth, Kate in Taming of the Shrew, M in Crave, and most recently Gwendolen Fairfax in The Importance of Being Earnest. She is a veteran of the United States Military.

BARRETTA CHULLEN: A recent graduate from Southern Illinois University Carbondale where she earned a Bachelors in Theatre and a Minor in Psychology, BarrettaChullen was always drawn to performance and acting even at a young age, but it wasn’t until High School that Barretta was given her first opportunity to be on stage. She’s always known that performance would play a major role in shaping her life. Barretta’s first role was a Wood Nymph in SIUC’s 2016 production of “Narnia”. She then portrayed Fathia Nkrumah in the 2017 production of “A Nightingale for Dr. Du Bois” by Femi Osofisan, directed by Segun Ojewuyi. Later she would return to “Narnia” but in an upgraded role as The Unicorn in the 2017 rerun. Barretta wishes only to live a happy life and knows that to do that, she must continue on her journey through the theater world. This is her first travel outside the United States of America and it’s a privilege to be visiting Nigeria.

Society for Book and Magazine Editors of Nigeria set...