It was the year 1723, in the ancient Kano,love and peace was the order of the day. The great walls had just been completed and the people of the town had never been safe like this before. The connection between the great city of Kano and the Arab world through the sub – Saharan trade routes made it easy for traders to bring in luxury items; spices, gold, high grade silk and other produce from the Arab world to Kano. Kano was the pride of the North, standing tall  like a giant in full body amour,  its walls protecting it from outside invaders. It was a perfect year,and the very air in the city complimented its beautiful looks. Golden bright and spicy as most of its food.

Kano was a city ruled by a great and powerful Emir. He ruled with a firm hand but was well loved and respected by his people. Within this beautiful realm lived Adamu, a man of the people, of a noble birth, a prosperous trader and a man that had the Emir’s ear and who used this for the betterment of his people at all times. However, popular as he was, Adamu carried a secret so dark that if it were ever discovered would utterly destroy him and his entire lineage. 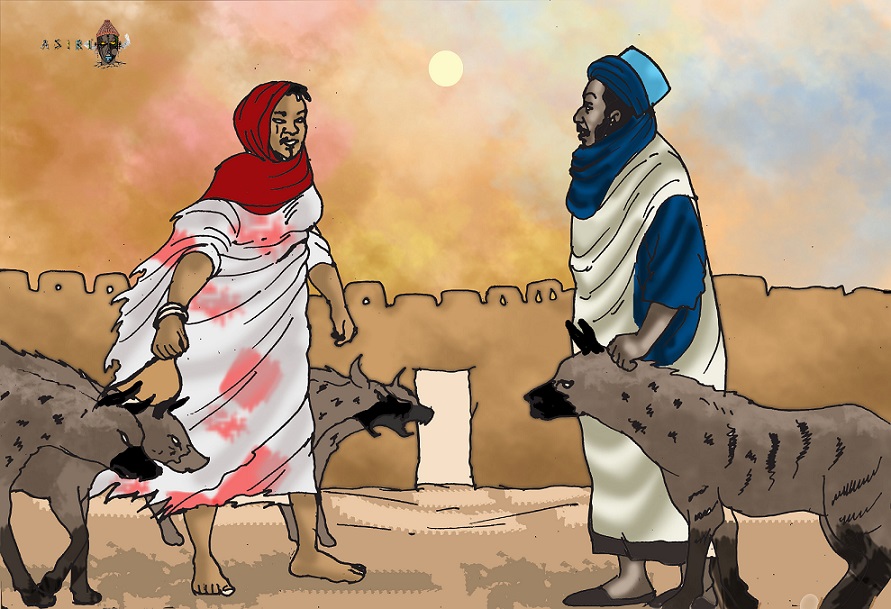 Adamu had a nagging feeling that things were not going well within the glowing city and that feeling had been steadily growing, coupled with the fact that he had been in the throne room when reports came that the almajiri boys were disappearing. The loss of a few were never of any concern but the number had grown significantly and the few that remained were scared witless and refusing to talk. Adamu tried to stamp out these feelings but could not help being uneasy.

After the legendary founder of Kano city, Bayagyida, had killed the dreaded serpent on the hill of Dala, the use of Magic, shape shifting and all forms of sorcery was banned in the entire North and he placed a terrible punishment on anyone caught practicing. No one practiced anymore,  at least not during the day. The ancient patterns and traditions were hard to break and under the cover of darkness the hills of Dala came alive. This is what worried Adamu the most. There was good Magic. Protective of the city but there were also horrors, nightmares and monsters. He feared that one of these monsters was on the prowl. But he could not reveal this without revealing how he came about that information and so he pushed his fears aside.

Late one afternoon on his way from Funtua market, and miles away from the city,  his horse stepped into a hole and fell, taking him and his merchandise with it. Adamu was saved from a broken body only by a miracle but was thrown from his horse and covered in bruises. The horse didn’t fare so well and he had to put it down. As he repacked his goods to carry, Adamu looked and tried to judge the distance he would have to walk. The walking was not a problem, he was in excellent shape. The shadows had lengthened however and the city gates would close at nightfall. There was no way he could make it back on time. Adamu was uneasy, he hated sleeping outside the city walls and that was not out of fear but out of a deeply buried conviction that if he did, a lot would go wrong. He just didn’t know how wrong.

Adamu took off running with the load strapped to his back. He ran fast, putting each foot down lightly and gracefully. As he ran he tested the evening air , searching for signs of danger. The previous night he had run too and had sensed an unfamiliar smell. Unfamiliar but nostalgic of the scent his former betrothed Tana. She who shared his bed, his perfect match, torn from him by tradition and custom. She was one more secret Adamu carried. The separation had driven her mad. In her desperation she turned to the hills and became a witch. Now it was whispered that she had acquired a new title, Tana the Terrible. Remembering the smell had Adamu running faster almost flying over the path.

Adamu had confronted Tana the previous night about this new smell, the smell of witch – wolves. She was the only powerful enough to change a mortal into a shape shifter with a single bite to the neck. She denied any knowledge of them swearing she was done with magic and would not hurt Adamu that way. But any trust between them had died a long time ago. Precisely the night he had pleaded with her not to run for the hills. Tana was up to something and he had the feeling it had to do with the missing almajiri boys. 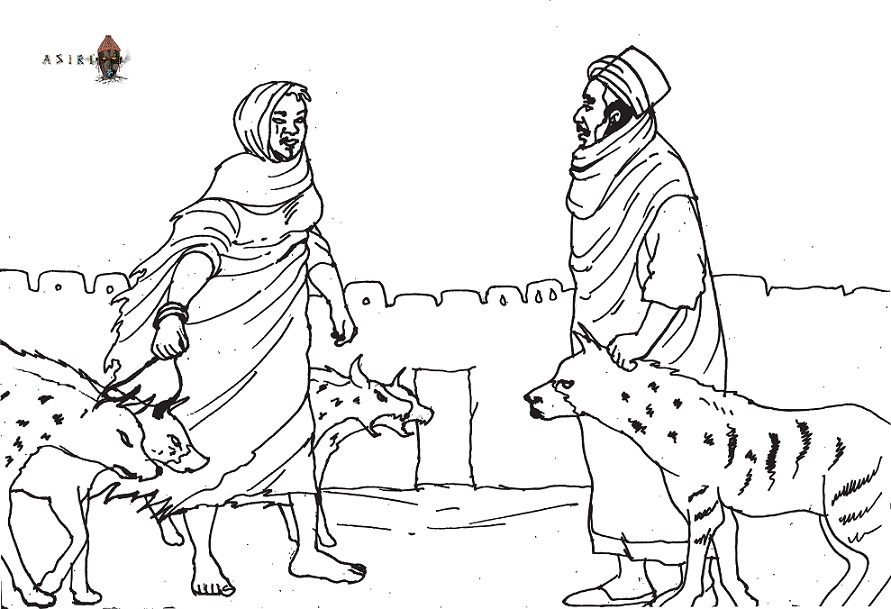 Meanwhile in the palace the Emir had finished his supper and was headed to say the evening prayers after which the city gates were closed for the night. Amira the palace maid had served him his favorite zobo infusion. It relaxed him when he took it as a tea and helped him sleep better.  As the Emir gave the final order for the city gates and headed for his rooms, Amira hurried along he back stairs of the palace to the small door that led into the palace from the side of the great wall. It was a little used door but will serve her purposes that night. Her job was relatively easy, slip a powder into the Emir’s drink, ensure he takes it, open the little door and then flee. She had been assured that it would not kill the Emir. No her mistress had bigger plans for the him.

Adamu ran as night fell and he veered right determined to sleep inside the city even though the gates were shut against intruders. He was one of the few people who could still find their way into the city after night fall. He just didn’t like to do that as he would have to leave his load outside the city walls overnight. Adamu came to a small hill and quickly concealed his load there. He then took off in the direction of the city, he ran so fast that the change wasn’t so obvious at first until he was running on all fours. Adamu was a shape shifter and actually had the power to change into any form he desired; his favourites being the black panther and the owl.

Now fully a panther, Adamu could smell the scent that had bothered him. It was a pack of wild dogs and ordinarily it would not have worried him had their essence not been inter – mingled with that of Tana. She was definitely up to something and it was not good. As he approached the little known entrance, he looked back at Dala hill and what he saw caused him to pause and then take off at an even faster speed.

Tana stood on Dala hill in her original form surrounded by her new band of dingos, ready to attack. Adamu knew that she had agents inside the city wall, after all that was what caused the final break in their relationship. Tana wanted to rule Kano, had always felt that magic should be allowed free rein. When she discovered he had magic she sought to enslave him. When that plan didn’t work she turned to witchcraft. Adamu and his fathers before him had a blood oath from ancient times to protect the Emir.

Adamu entered the city and headed straight for the palace. Before he could get into the Private Chambers of the Emir, he had already been attacked with his lower torso ripped up by Tana’s wild creatures, two of his servants killed and he barely struggling with one of the dogs with his dagger which was just a few inches from his reach. Adamu charged in and started taking out the dogs one after the other, it was a fierce fight. Tana flew in at that moment ready to defend her dogs. The Emir reached for his dagger and took a stab at the exposed throat of the dog on top of him. It yelped and dropped to the ground dead. He drew himself up with his elbows and threw his dagger catching another in the chest. Tana swirled in fury raising her staff to strike him with magic when he hit the royal bell. The sudden clanging of the bells distracted her briefly and she missed, hitting one of the dead bodies on the floor instead. Tana snarled aiming to strike again but Adamu leaped into the air and bit her arm making the staff clatter on the floor. They both went for the staff but Tana reached it first and struck him with it. She then twirled it around her head twice and disappeared in a cloud of smoke along with her dogs leaving a bleeding Adamu. The royal guards hearing the bell rushed down into the Emir’s rooms. Adamu was loosing a lot of blood and needed to wear his human skin fast but all that was on his mind was to reach the Emir and know that he was alright. There was so much blood in the room, eight servants dead and one panther bleeding and slowly changing into a man.  One of the servants caught a glimpse of the flying witching flying out of the window with five dogs.

Daylight came and Adamu woke up slowly to find himself chained to a pole by the market square and was already condemned to death by mid-day. Tana stood on the hill of Dala watching a man she had loved long before greed and a quest for power had taken over her heart about to be put to death. A long and painful death. Something long dead in her flickered to life.

At Midday, as the town crier announced  Adamu’s crimes for the populace, a terrible storm appeared in the middle of the market square and there in the midst of the storm was Tana. She swooped down and grabbed Adamu, flying out,the people of Kano had never seen anything like this before. The royal guards started firing poisoned arrows at the whirl wind, one struck Tana and she fell to the ground.  The soldiers grabbed her and pinned her down. The momentum of the wind took Adamu to the other side of the city gate and dropped him off then. As the soldiers dragged Tana off, the people in the market square could hear her wild dogs howling…

This is just the beginning.

Folktales,myths & Legends, Trending Adamu and the Witch of Dala