This article is on the story of how the Igbo saying Evula ko, came about. It literally means wise male sheep, however it is used to address one who is deemed as wise or smart in their ways

In an era, long before the time of our fathers and our fathers’ fathers, there was a kingdom of animals, a kingdom which no human eye ever saw. In this kingdom, the animals lived and functioned like humans, created families and there was peaceful co-existence.

Agu was the most feared and revered of all animals. His name alone, was enough to send other animals running off and in his presence, the animals trembled.

It happened that Agu’s first daughter just had a baby, and according to Igbo tradition, it was only right to get a helper for Agu’s daughter to assist with the baby.

Agu summoned for Aturu. Aturu, upon hearing that he was summoned became scared, wondering, to what he owed this summoning. Upon getting to Agu’s house, Agu said to him, “Aturu, I am sure you’ve heard that my daughter just had a baby. She needs a helper and I want one of your children to assist.” Aturu replied, saying, “As you wish Agu.” 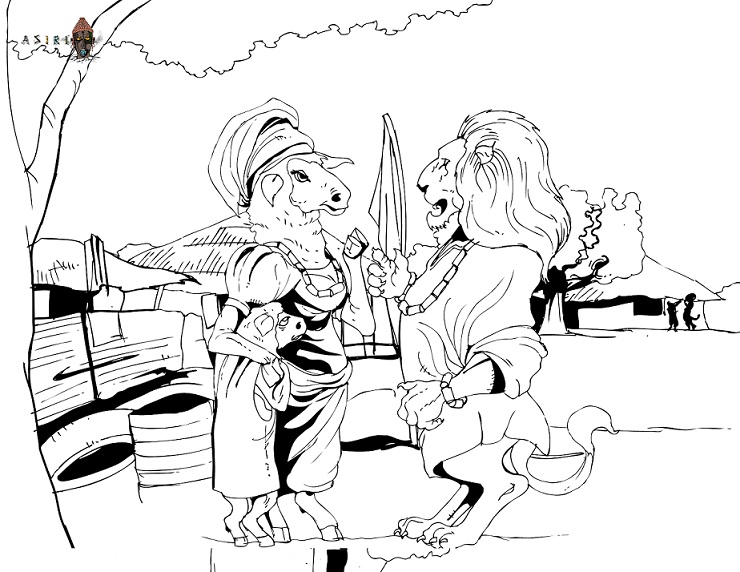 On getting home, she called all her children and asked a question, “How many times would you be hurt, before you strike back?” Each of her children began to reply, some said once, some twice, some said they wouldn’t even strike back, but her son Evula, spoke and said, “You don’t even give them the opportunity to hurt you.” On hearing this, Aturu knew instantly, that Evula was the chosen one and so she sent him to Agu.

Agu received Evula with a joyful heart. He immediately started planning on how to make Evula the perfect meal. Evula sensed this and he began to prepare for the worst.

It was tradition, to rub Nzu (white chalk) on the baby, after a bath. After bathing Agu’s grandchild, Evula was about to cover the baby’s skin with Nzu, however Agu came in and covered Evula in the Nzu instead. He then instructed Evula to lie where the baby normally lies, and then put the baby in Evula’s position. Evula did as instructed, but unknown to Agu, Evula knew exactly what he was planning.

Immediately Agu left, Evula covered the baby in Nzu and put him in his original spot. Once darkness set in, and the kingdom was asleep, Agu entered the room and pounced on his grandchild, thinking it was Evula. Immediately, Evula ran out and Agu realized what he had done; he had killed his grandchild. Filled with rage, Agu began to pursue Evula.

Agu, on arriving at the tree, bellowed, “Evula come down and let me teach you a lesson” Evula replied saying, “Agu look into my eyes and I will show you the lesson.”

Agu stared at Evula, and before he could blink, Evula spat all the pepper he had gathered into his eyes, rendering him weak and defeated. Agu stumbled home in shame and Evula became the pride of the kingdom. A true hero as he defeated the most feared Agu.

So the next time you see a display of wisdom,

Felabration 2015 Celebration and Many More Events at Freedom...