The Musical Society of Nigeria (MUSON) will be hosting a concert in honor of the renowned composer and musicologist, Professor Akin Euba on January 17 in the Agip Recital Hall. The concert will start at 6pm prompt. Jointly sponsored by MUSON and the University of Lagos, the musical concert will showcase some of Nigeria’s top performers of classical music, including pianists, singers, conductors, and choral groups. 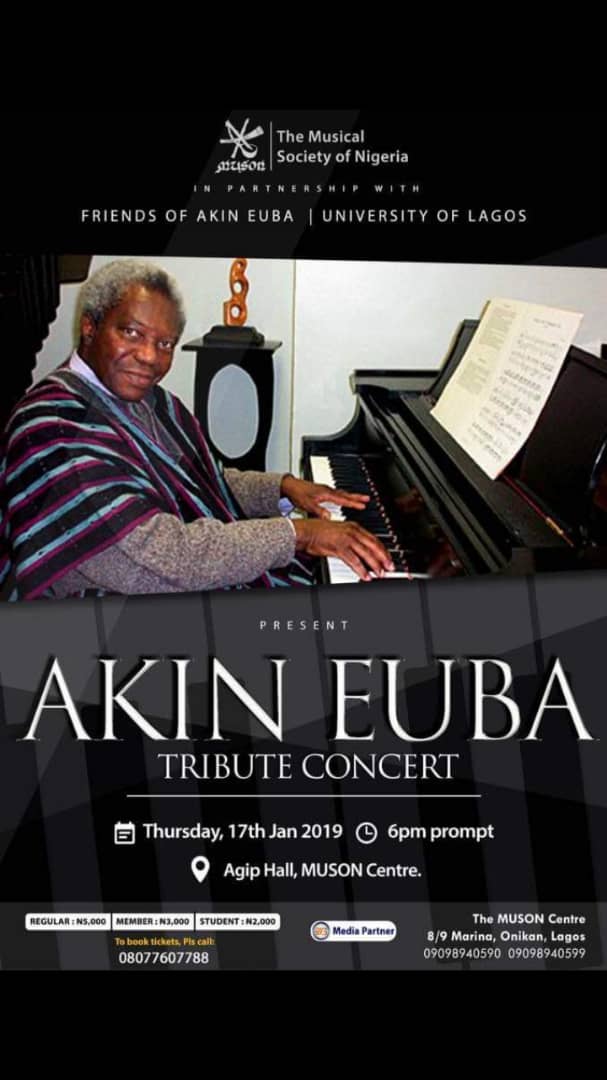 The concert will feature the music of Akin Eubas well as the works of other Nigerian composers, including TKE Phillips, Okechukwu Ndubuisi, and Ayo Bankole.  Sir Emeka Nwokedi, the Deputy Director of MUSON School of Music will be conducting the MUSON Dip Choir. Also in the line-up of choral groups are the Unilag Chorale, conducted by Dr. Albert Oikelome; and the Mountain Top Chorale, conducted by Aderayo Oyegbade.

The concert will also attract musicians from the United States and Ghana, including the young Ghanaian pianist, David Kafui, and Professor John Robison of the University of South Florida, who, along with SeunOwoaje, will be performing Akin Euba’s Five Pieces for English Horn and Piano.

Professor Omojola has been coordinating with the MUSON management and staff, including Banke Ademola (Director of MUSON School of Music), Sir Emeka Nwokedi, the Deputy Director,and Ayo Bankole, to organize the concert.

Euba’s contributions to Africanist music scholarship and the growth of African art music are well known. He introduced the concept of African pianism to theorize the ways in which composers could use the Western pianoforte compositionally to reinterpret the structural and performance features of African music. Also, he coined and popularized the term,creative ethnomusicology to conceptualize the relationship between ethnographic research and musical composition.

In addition, for many years, Euba edited a newsletter, directed a research center, and organized an inter-continental symposium series to explore the significance of interculturalism in musical composition and performance. Euba’s works include numerous academic publications and compositions, prominent examples of which are his book, Yoruba Drumming (Bayreuth: Bayreuth African Studies Series, 1990), and Chaka, an opera in two chants, which was recorded by the City of Birmingham Touring Opera (UK), conducted by Simon Halsey, in 1999.