Your Greedy Friend will Fail You:A Review of Oyono’s the Old Man and the Medal

A heel over friendship is the sort in which one of the parties must maintain docility, take up the position of the prey and of the oppressed, endure all manner of miserable conditions thrown at his laps so the bond may continue to thrive. This was the situation during colonialism which of course, didn’t happen for the mere sake of adventure to places occupied by other races. It wasn’t for the sake of the Christian gospel, neither was it for the spread of a burgeoning urbanization as it were. Colonialism was predicated on the need for self-aggrandizement; a purpose to which everything else was subordinate.

As attested to in Mongo Beti’s Mission to Kala, “all colonial systems have one thing in common, a belief in the efficacy of the big stick”, it was about domination and the satisfaction of utter greed. This is the kind of relationship between the African natives and the foreign whites in Ferdinand Oyono’s The Old Man and the Medal(1956); lopsided, where the whites guard theirs with the jealousy of an eagle over its eggs but give the basest of abuses to all that concerns the Blacks. It was the type of partnership that existed all through the colonies of the imperial Europe, in this milieu, francophone African countries of which Doum is imaginative microcosm. 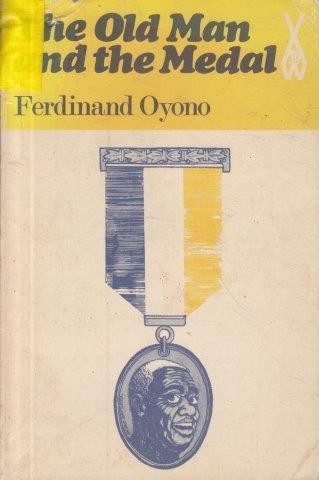 Overwhelmed by the despair the Whiteman brings which is an antithesis to the everyday profession of equal rights and eternal friendship;the locals thereafter could perceive the underlay superior instinct as conveyed in the Whiteman’s sanctimony. Though major damages have been done to their inner self, it is not too late when the Africans realize that the promises of the visitors are tranquilizers meant to truss them to the stake of hope that renders them vulnerable to the present and despondent in the no-distant future. This is what churns their stomach; the intense level of disillusionment, it paves way for a vehement revolt against a structure that tyrannizes them in their own lair. A moment of epiphany dawns eventually and the message of “return to your root’ is aggressively preached. A new hope is born. The colonial periods might have come and gone, notwithstanding, this kind of friendship still exists and commands noticeable presence around the world that, any attempt at reversing the status quo  between the “colonizers” and the “colonized”is met with unbelievable bloodbath. When you are into a relationship with a greedy partner, such as the French in colonial Africa, have it in mind that, not even your most sacred cultural value is worth a seed of bean, nor is the knowledge that you have only been wreathed with a medal of honor or just dined with their great chief few minutes ago is anything of significance good enough to include you to their realm of sweeping self-indulgence.

This kind of union is bound to fail you and keep you sullen and despaired like Meka. Weaned over from his traditional religious belief, Meka, the central character, is baptized into Catholicism and immersed thoroughly in the church doctrinal practices. This becomes an inroad to looting him dry by the creators of the system he has implicit faith. Just as the policy of assimilation was meant for; you are an inferior and your “gracious” friend and master only wants you to enjoy the benevolence of being acculturated into his superior belief system through a suffocating immersion. It is a rare opportunity that has been extended to you, so grab it with both hands and shut your trap!

Meka is a typical African: audacious and generous, he is made vulnerable by Western hoopla and in his unrealistic dream to be like them, is left vandalized and without anything of his own. His two sons he donated to fight on the side of the French during the second world war never came back home, the only patrimony his father left him; a piece of land is also offered for the building of the church cathedral. In the end, he is awarded a worthless medal, a symbol of all present colonial relics across Africa. A receipt of rape and impoverishment.

Oyono centers his work around the problem of his time and by extension addresses our contemporary ideals and is also able to proffer solution with loud emphasis on the need for self-discovery and a return to the foundation of our problem which started when we made a U-turn from our pre-colonial past. Like someone of Achebe’s mindset would say; a fish doesn’t live on land. Let every creature return to its natural habitat and by this, the present cultural confusion and the pervasive psychological dilemma as hinted in Gabriel Okara’s “Piano and Drums” another lamentation over the woes of culture contact in African, would have been cured permanently. But the pertinent question is; has the African of today interrogated his conditions as much as necessary and engaged sufficiently in self-searching mission that would make him knowledgeable enough to consider the essence of going back to where the rains started to beat him? The Whiteman’s ways certainly boast of many enticing sides, but an absorption in it at the demonization of your natural configuration inevitably leads to a disastrous end. This is the sermon the metaphor of Meka preaches. His humiliation makes a salubrious effect notwithstanding the great suffering in the hands of his ‘friends” who have no respects for his old age or reverence for his new medal. Meka had by Dutch courage while at the dinner party, laments the aloofness of the white community and had derisively invited the chief of Whites to a dinner in his hut.This is amplified in the chief of Ekan’s speech and is sufficed to buttress the claim of a tilted friendship:

“I don’t understand …all these whites, like their great chief, say we are more than friends to each other.  But, has anyone here ever come across a white hand in the same dish of food? No one, Noooooo one! The company shouted!” (110).

For Meka, the solution is not to employ physical confrontation; he certainly knows where the severance had taken place and is inclined to suture it as soon as possible.Though he could feel the rage for violence knocking against the walls of his swollen veins, for him, healing could only be achieved through an invigorated passion for the traditional heritage. Consequently, the lies he had inherited from his colonizers that his culture is riddled with superstitious beliefs and are thus unfit for the modern man are discarded with immediacy. It is this reality that infuriates him when Mvondo talks about “giving praises to the Lord” when he had barely returned from the cell where he spends the night distraught.  He vents his fury thus:

“ You start talking about the Lord. Since you started sprinkling yourself with holy water your wrinkles haven’t disappeared” (147).

He gets raving mad when in his house, Ignatius Obebe exploded in profuse accent “Yeso-Christooss!” This sets Meka’s soul on fire! Here is his response: “fuck off, out of here. Go on, get out of my hut!

The Old Man and the Medal is one of the books you come across that make you wonder why such books have not made it to the bookshelf of every so-called reader, or at least, gained a seismic popularity through appearances in school literary curriculum. It is an under-sung book; else, how many people really have read this incredibly written delicacy of African storytelling? The Old Man and the Medal is a prescription for all literates because, besides its thematic concern, with reference to its bracing wealth of literary aesthetics, is a bastion of African luxurious similes neatly place with such felicity that is capable of transporting its readers to a state of “shameless” cheerfulness. It possesses such enchanting moments as to be able to generate a yearning for homecoming in anyone or the longings to get rooted in the traditional in an African reader in particular, who in the past, has experienced the countryside in a typical village setting. This love for the rural is demonstrated in an absolute dependence on the Orature, the flora and fauna, this is what has become the winning card for the thoroughbred writers of African upbringing, who are able to find pride in what is theirs to preserve even in the prevalence of a corrosive and obtrusive alien culture, are convinced to latch on to such authentic coloration.

african literature, Ferdinand Oyono, Festival of Arts and Culture, Literature, The Old Man and the Medal

News, Reviews, Trending Your Greedy Friend will Fail You:A Review of Oyono’s the Old Man and the Medal