The Ooni of lfe, His Imperial Majesty Ooni Adeyeye Enitan Ogunwusi Ojaja II has described Sir Olaniwun Ajayi as his unforgettable pillar of support, exemplary Pan – Africanist with unapologetic patriotism in the course of Yoruba emancipation, unity and progress.

The spiritual leader of the Yoruba race made this known on Friday in a condolence statement released by his Director of Media and Public Affairs Comrade Moses Olafare saying that apart from being a dependable leader of Remo people of Ogun State, Sir Olaniwun Ajayi had spent great part of his life as a pillar behind the throne of Oduduwa in Ile – Ife and a committed Yoruba patriot whose ideology of progressiveness remained incorruptible till his glorious passage. 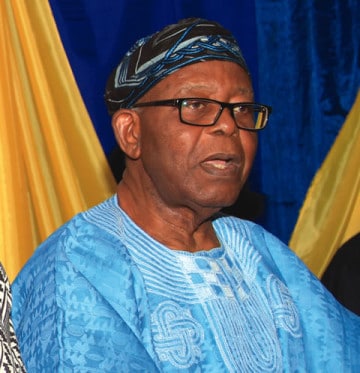 ‘May his soul rest in the perfect peace of the Almighty Olodumare’ Ooni Ogunwusi said.

The Afenifere Chieftain died on Thursday before 12 midnight at the age of 91 years.