A very long time ago, long before civilization, before the first white man appeared on our shores. Before we ever heard the first shot of the big iron guns in our lands. It was a peaceful time, most of the gods loved us and we loved them even more. Some gods didn’t believe in the existence of man and tried very hard to wipe us off the face of the earth, but Eledumare the first before the rest, the father of all, was kind enough to have faith in mankind. I don’t understand why, but he stood firm to make sure the other gods and orishas do his bidding.

It was a period when man and spirits existed side by side, a time when the forest spirits saluted the hunter on his way out to hunt and when the mermaid warned the fisherman if Olokun was not happy with him, cautioning that to fish that day could be fatal. It was an age when the mighty Oro of the Iroko tree summoned all the other trees in the forest and instructed them to be kind to man, when not every antelope in the forest was meat to be hunted, because she just might be the wife of the Antelope king or even your wife that just left the house and took her animal form to explore and enjoy the beauty of mother nature which she missed ever since she became human. 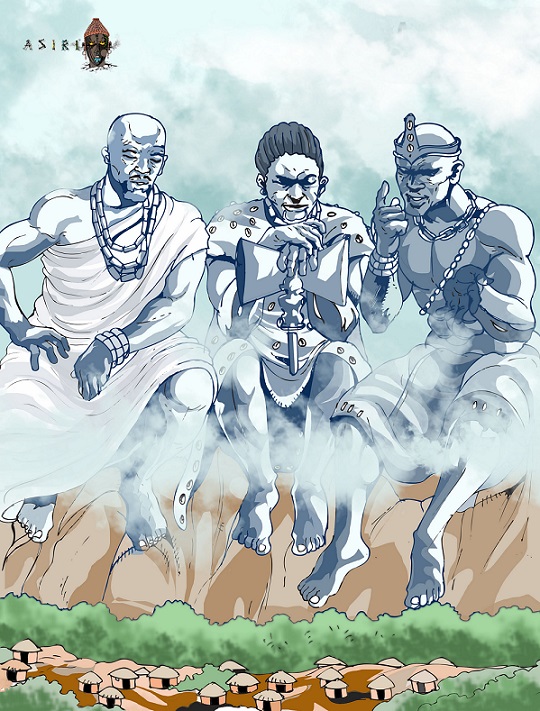 In that period there lived a man, the first son of a hunter, known to all as ‘crocodile hunter’ who got his name from the famous battle he once had with a three headed crocodile monster. He killed the beast but it left its mark on him. He was married to Aduke the lovely palm oil seller and a noble servant of Olokun.I am the first son of that union.

The village I was born into was a quiet and peaceful village protected by Orunmila,the wise philosopher, a man that was so faithful and wise that when he passed to the land of the spirits, Eledumare made him an Orisha[1]. There were other protectors; Sango, the former Alaafin of Oyo, a lover of the Bata drummer and a wonderful dancer whose anger often got the best of him. He became the god of lighting and thunder as well the custodian of the Bata drum and last, Ogun – the god of iron, the dog lover and the custodian of cross roads. Esu, the divine messenger was sometimes asked to share the crossroads with him.

These three gods were mandated by Eledumare himself to be the guardians of my village, Akooda. Akooda was not just any village but the gateway between the land of the condemned and the world of the living. As such, it had engaged in several battles with demons from the condemned spirit world for years now. These demons sought to enslave the people of the village and also its resources for their use.

The village was protected because their guardians knew the three weaknesses of the demons. Insatiable curiosity, playfulness and the inability to say no to a dare. Thus, Orunmila gave them riddles with a penalty of banishment if he had to reveal the answer. They could never solve the riddles and their curiosity ensured their banishment. Sango’s weapon against those that escaped Orunmila’s riddle was to play his bata drum, they could not resist and were arrested in a continuous dance until he struck them with lightning destroying them. The hardy few that remained were dared to fight Ogun at the crossroads. None ever made it past him. 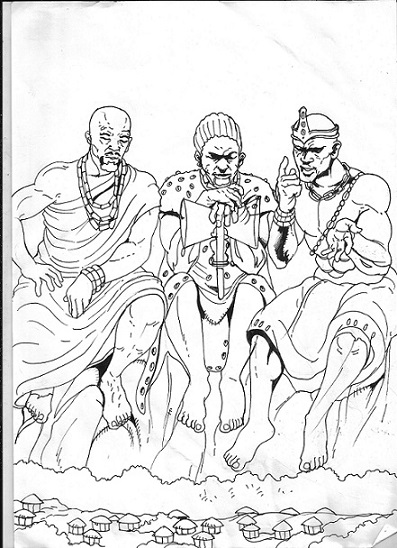 The village of Akooda was a village that all neighboring villages were envious of, perhaps because of the closeness we shared with the gods or how blessed we were with a fruitful land. We had the best hunters, fishermen and not forgetting the mysterious “Omi fun fun” river that flowed only at night with bright shinning white stones in it. A river that heals any disease and ailments in the land, as long you don’t step into it with clothes on. The adjoining villages would once in a while would try to pollute the river but Yemoja, the goddess of the river, guarding the river would not allow this to happen.

Now you see why my village is a special one and why we have the best of the gods and orishas protecting us. All was good,until one evening, the dreaded god of vengeance, strife and punishment, Sopona, walked into the village;Sopona the very dreaded one, the god other gods dreaded having dealings with. How did he get into Akooda undetected  by the powerful eyes of Ogun, the custodian of the cross roads? Well,the answer wasn’t far fetched. He came into the village in the form of “Olukunle” the newly born son of the Village priest. He came to seek revenge for a crime committed 16 moons back.

Things were about to change in Akooda on the eve of his birth. We had heard a loud harsh sound in the village;it was the sound of what we later learnt was the white man’s gun. That night, it was the first full white moon in 300 years. Change was here in Akooda and we were not ready for it.