The historical prominence of Hausa Land evokes our sense of wonder, so also does its Ancient architecture in equal measure. Think of those sophisticated mud buildings with their captivating facades, embellished in mosaic of bright ,intersected colors that resonate with our aesthetic sensitivities.

Often, public buildings such as mosques and palaces that have been preserved are the testament of this architectural feat. The ancient Central Mosque of Zazzau Emirate, built in 1837 (now 179 years old), is such an emblematic monument in this regard. The mosque was built in the reign of Sarki Abdulkarimu (1834-46), the founder of’Gidan Kastinawa’ – Katsinawa dynasty of Zazzau; to which the current Emir of Zazzau, HRH Alh. Shehu Idris belongs. Sarki Abdulkarimu was said to have employed the service of Muhammadu Durugu (Babban Gwani), one of the famous builders in the whole of Sokoto Caliphate. Babban Gwani was quite famous. 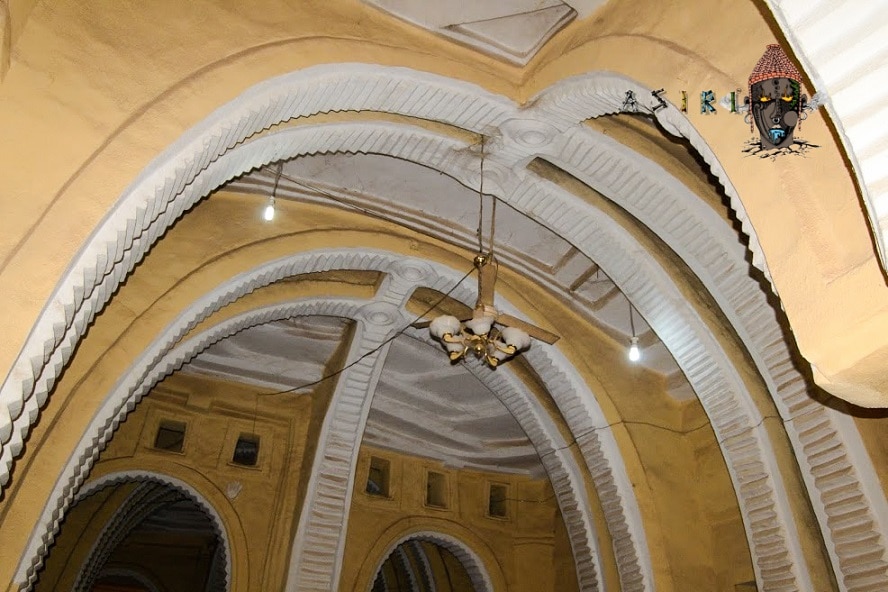 Interior of the Mosque. Amazing architecture dating back to 1837

Naturally, he’s a legendary figure to the inhabitants of this ancient city. To his credit, the mosques at the palaces of Birnin Gwari(Kaduna State) and Bauchi (Bauchi State) were said to have been built by him.

MallamYahaya, my tour guide, is the current custodian of the mosque; an old,wrinkle-faced man, in the way of eighty-something years old. He told me that Babban Gwani was said to have requested 100 slaves from Sarki Abdulkarimu to assist in throwing lumps of mud and bricks to him, while he arranged them alone. “There were so many great builders in the olden days” he said” but Babban Gwani was famous for being a lone builder who would only work during the night time”. 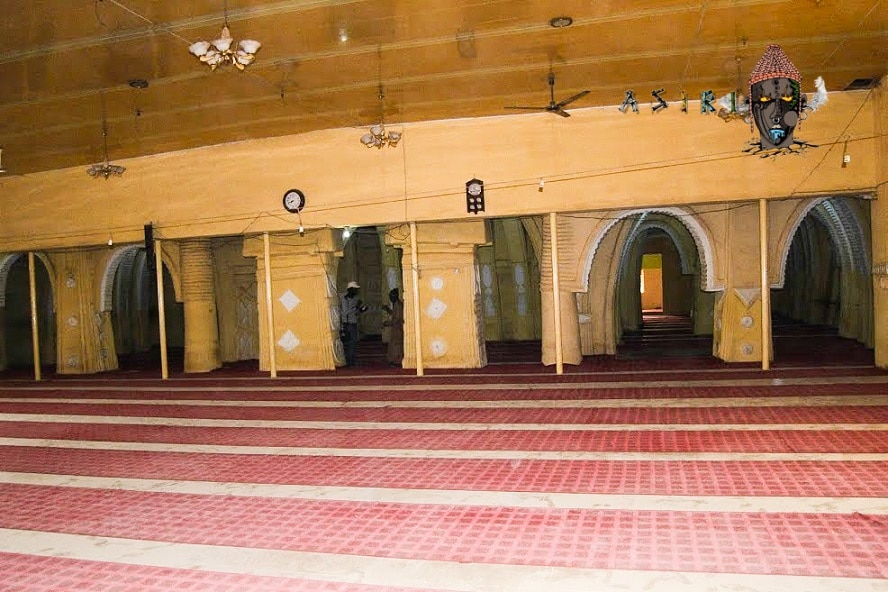 A good view of the original walls of the mosque

Although its exterior appearance has been remodelled in recent times, and its backside has been extended, somewhat, to accommodate the growing number of worshipers, the interior of the mosque has been preserved, and a glance inside promises a great insight into the architectural achievement of Hausa Land. The interior is a marvel. On entering, one gets fascinated by its unmistakable splendour. The intricate lines, neatly carved on so fits of arcs and edges of big, recessed columns; the graceful design patterns painstakingly engraved on each of the column, and also the arrangement of the columns, strewn all over the mosque to form a massive colonnade. 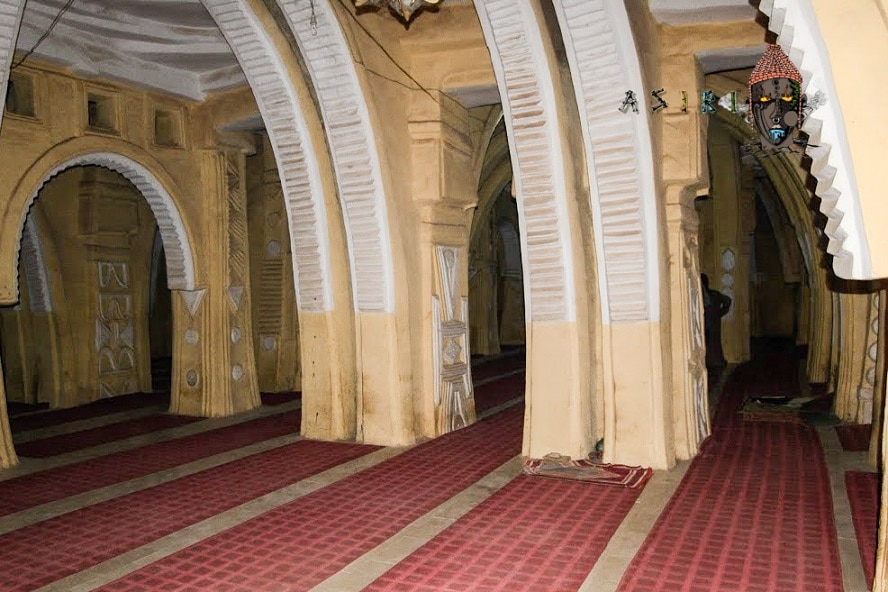 Think of those Gothic Cathedrals in Europe- say, the one in Canterbury, England .Imagine then the staggering – or, to someone like me, the dwarfing – sensation that will grip you upon entering it for the first time. You, a comparatively minute creature standing in the expansive interior of a mammoth structure. This mosque isn’t as gigantic as one of those cathedrals, but its big, soaring columns give you a palatable feeling as much. 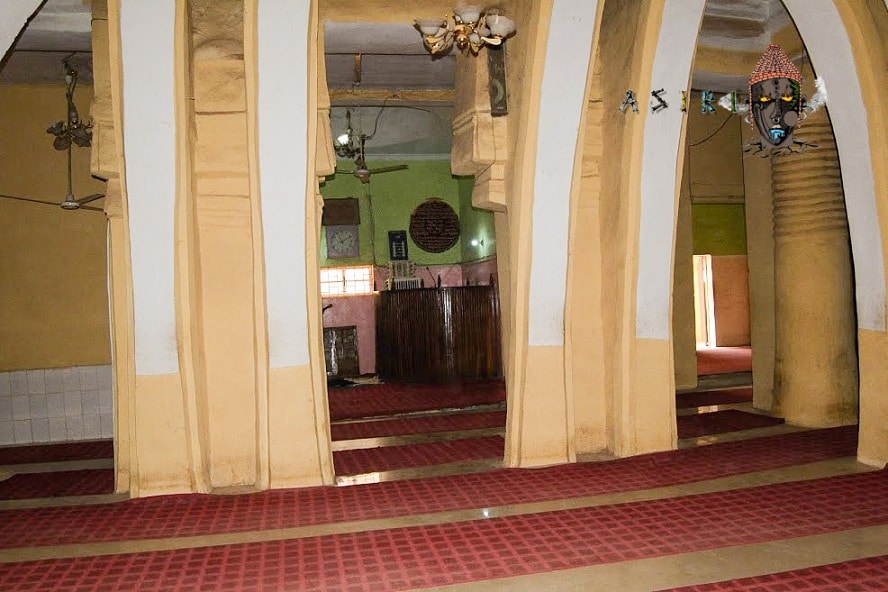 Not very much successful though, but a conscious effort is seemed to have been made to maintain a remarkable level of consistency in distributing the design patterns, most of which are very elegant. Whereas some of them are mere crisscrosses, circles, triangles etc. that are sparsely etched on the columns. The craftsmanship exhibited here reflects the profundity of thought as possessed by Babban Gwani. This mosque is one of those ancient places you go to as an escape from our boring, everyday reality; it’s a place where the present is merged with both the past and the future. Here, you can summon all your imaginative powers in a subliminal, trance like state, leaving all else in the background, to transcend the conventional barriers of time. You can envision the ancients, dressed in their white boubous and turbans, happily coming in to pray and going out of the mosque.

Walking silently beside Mallam Yahaya inside the Mosque, I asked him whether the interior design has been improved upon over the years. “He was such a great builder”, he replied. “All the design here was done by him “Follow me, let me show you the imprint of his palm”. He paced on, and I followed. While walking, he added “The only change you’d talk of is the paint coating that is done every now and then to make the place more presentable”. “Look, there it is”, he pointed with his hand.” That’s his mark” he said and smiled.  Standing right there, I couldn’t help but wonder whether Durungu had traveled far and wide, say to Arab land and was influenced by, for instance, the Great Mosque of Damascus, Syria, or the mosques in Mekkah. 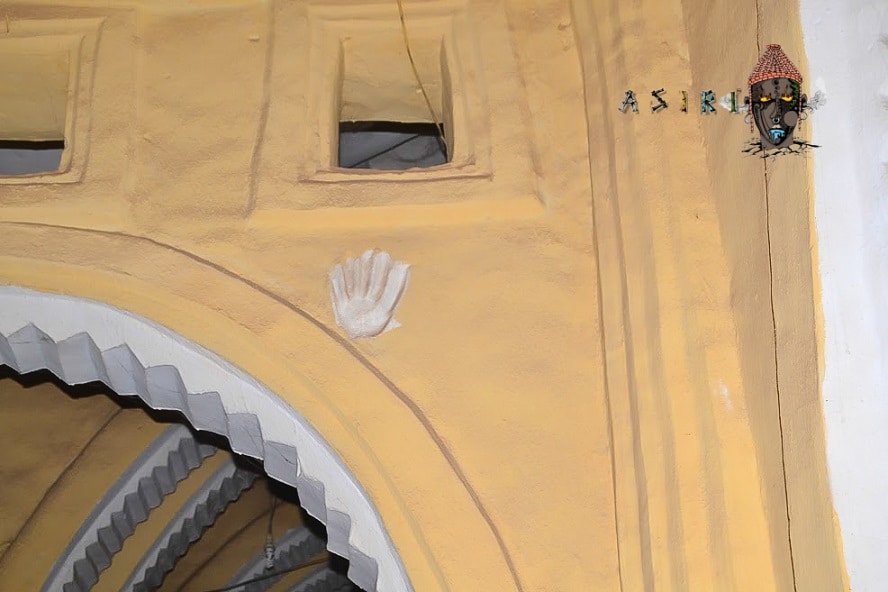 Babban Gwani hand print signature on the mosque since 1837

The conceptual similarities are just stunning.  As believed by many people, his greatness wasn’t only based on his craftsmanship. A fictitious part of his legend, which popped up in all the versions I heard,is that he visibly showed Sarki Abdulkarimu the Ka’aba in Mekkah from this particular mosque, on account of a slight disagreement between them as to whether the mosque is facing the Qibla or not- the direction Muslims face when praying. Apparently, the emir was excited and named him Babban Gwani (the arch-master).

This is where the moniker came from, which has now become the hereditary title given to the head of builders in Zazzau Emirate and must become of his descendants.  Like all the major Palaces in Sokoto Caliphate, this ancient mosque is located djacent to the Emir’s Palace, at the center of the ancient city of Zaria. 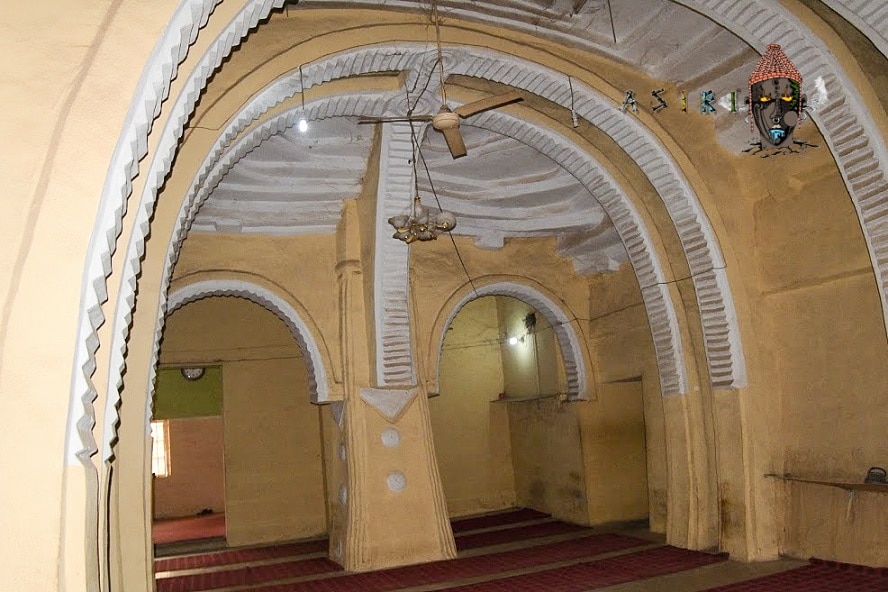 The idea was for the emir to lead the congregational prayer. However,as stated by Suleiman Shehu, a graduate of History from ABU Zaria, who Has recently finished a study of all the Mosques within the ancient walls of Zazzau, this mosque wasn’t the first mosque ever built in this ancient city.There had been a central mosque in Zazzau Kingdom long before the incorporationof Zazzau as an emirate in the Sokoto Caliphate after 1804 Jihad. “SarkiAbdulkarimu and the two emirs before him led congregational prayers in the old mosque before relocating it in 1837 to where it is now” he said. Although the mosque had since collapsed, the site is preserved to date, at Anguwan Juma,Zaria City. Perhaps, the name of the place “Juma” is an eponym for the erstwhile Jumu’at Mosque that used to be there.

About the Author: Abdurrahim Salihu

Abdurrahim Salihu is a writer from Zaria.
« Previous Story

Amintacciyar Hanyar Arewa (A Safe Passage to the North)...