From time immemorial artists all around the world have been influenced by their surroundings, most of them transfer the energy of their surroundings, culture and heritage into their art works, thus creating a unique platform that exposes the essence of man and his environment. One of such artists who has been true to his roots and origin is New York based Nigerian; Moyosore Martins.

Born of a Brazilian descendant father from lagos island  and Mother from Ekiti state, Martins developed a rare sense of mixed cultural independence from his family’s tribal roots and also created a sense of fashion from his travels and upbringings. The streets of London, New York and his college years in Accra Ghana and Ivory Coast are blended in his artwork showcasing his Yoruba cultural heritage. 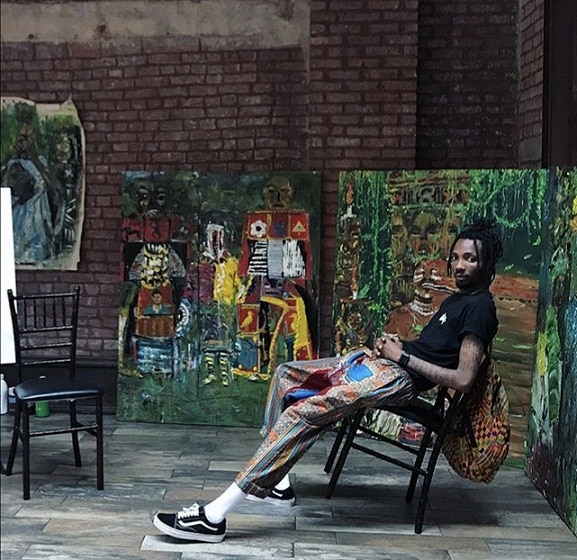 Self taught and trained; Martins’ gift is one of spiritual nature and first came to him when he picked up a paintbrush and pencil at a young age. His father never allowed him to study art or even create one! so he doodled on his notebooks in school and was punished severely – a  foreshadowing of his future work.  His passion for expression through different art forms is seen in his oil paintings, clay sculptures, digital and fashion designs

Martins has been featured at exhibitions around Manhattan and Brooklyn, New York.  Alongside fellow community artists, his artworks have been at local galleries and venues including Heath Gallery, Art United.org’s Radical Resistance to Xenophobia at El Taller Latino Americano Gallery. He has also performed a live painting at the Jollof Festival presented by Ankara Bazaar in Dumbo.

We stumbled on Moyo’s artistic work on his Instagram page, and what caught our attention was how he paid much attention to Yoruba culture and heritage in his digital paintings. Treading on ancient paths that have been abandoned by other artistes and considered as ‘non profitable’, Moyo is set on that mission of creating milky way’s towards cultural, tradition and spiritual pathways.

This is his Art Story.  Moyosore has taken the duty on himself to inform and educate the world about his heritage through his artworks. Like a priest who points the way of light to people, the brand Moyosore New York is creating pathways to cultural, traditional and spiritual enlightenment with his artworks.

NOTE: All the Artwork featured in this series, were exclusively created for ASIRI MAGAZINE