A new and unique exhibition of graphic work and Adire batik by the famous artist Susanne Wenger (1915-2009) just opened in Austria. The show was curated by Wolfgang Denk, director of the Susanne Wenger Foundation, a museum dedicated to the heritage of the artist. 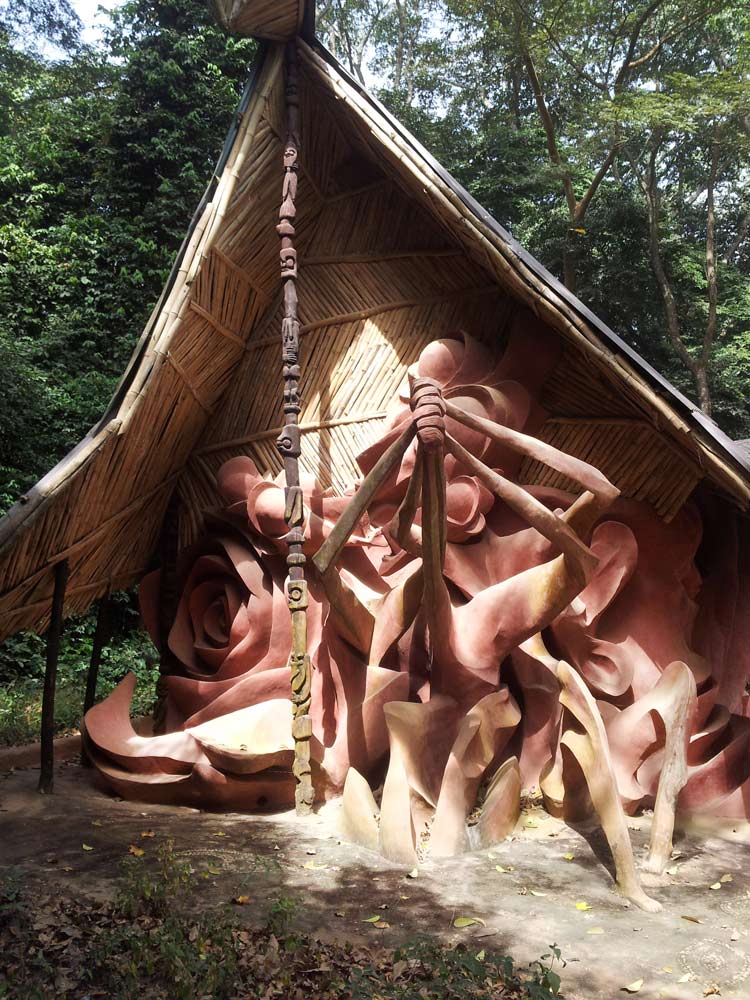 The earliest pencil drawings in this show were made before the Second World War. They are expressive landscape depictions in which the artist seems to anticipate her later ritual connection with nature. In the nights that Vienna was being bombed, she created Traumgesichte (Dream Faces), coloured pencil drawings, populated by monstrous hybrids of humans and animals. Wenger was active in the resistance at this time. She early believed in art as a language of the unconscious that is common to all people. The series Tierkreiszeichen (Zodiac Signs) shows her interest in symbolism and the theory of archetypes. 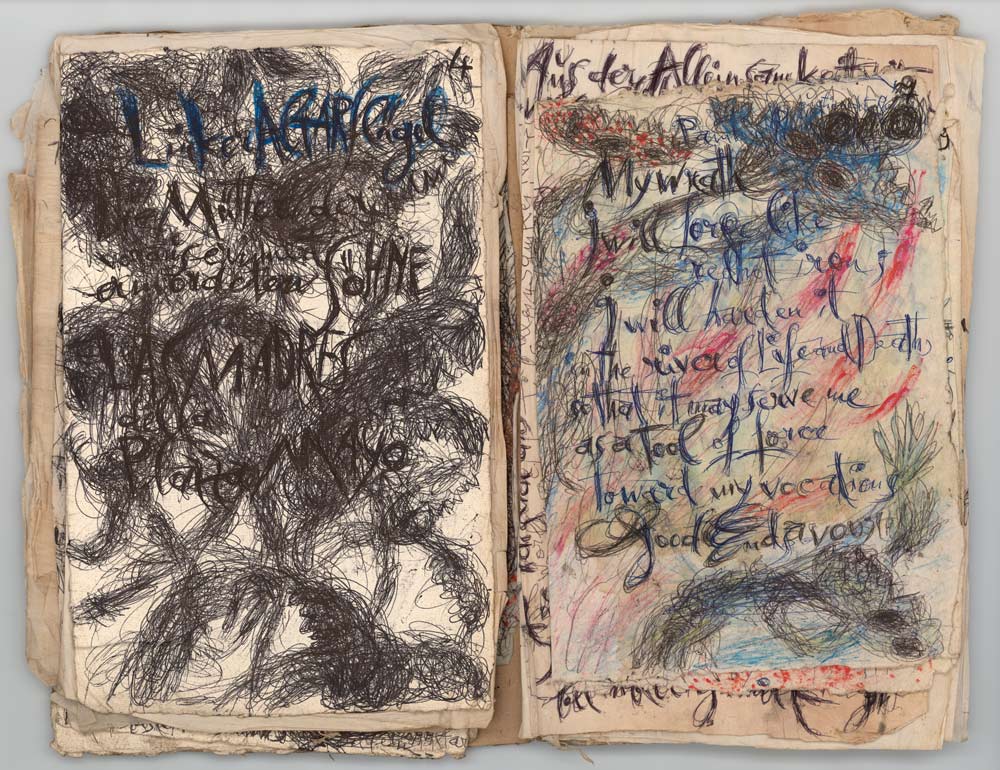 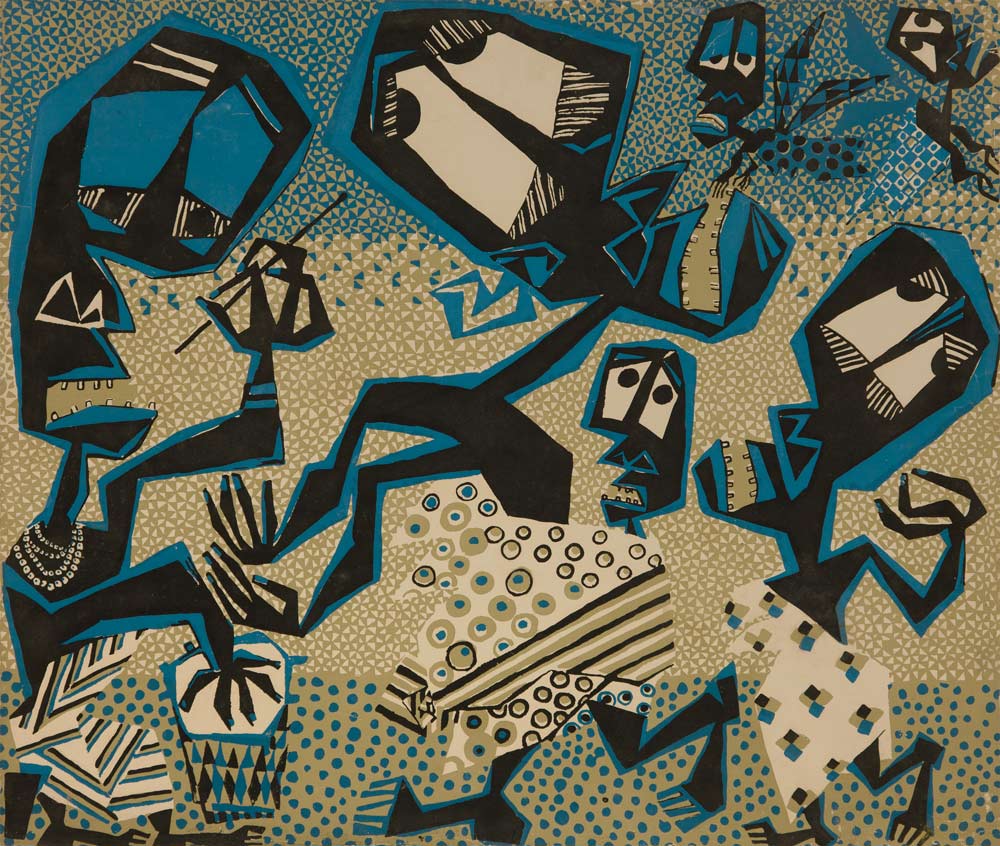 In post-war Vienna, Wenger was a co-founder of the Art Club. In 1950 she went with the publicist Ulli Beier, via Paris, to Nigeria and found there her home. During her severe tuberculosis in 1955, she created miniature paintings, the so-called Holztafelbildchen (Wooden Panel Paintings). The exhibited charcoal drawings come from this period. Her severe illness, described by her as an ‘initiation disease’, marks the passage into her life as an initiated priestess and Olorisa of the Yoruba deities Obatala and Sonponna.

It was now that Wenger began using the Yoruba Adire batik technique in her art. The batiks were drawn with cassava starch on fabric and dyed with vegetable substances. The works Mythos der Oduduwa Schöpfungsgeschichte (Myth of the Oduduwa Creation Story) and Die magische Frau (The Magical Woman) were created during the time ofher immersion in the culture and spirituality of the Yoruba. Local patterns meet here a modern European form language. Parallel to this, Wenger made printed graphics in linocut and with screen printing technique. Later, the wax batik technique allowed her to extend greatly her colour palette. 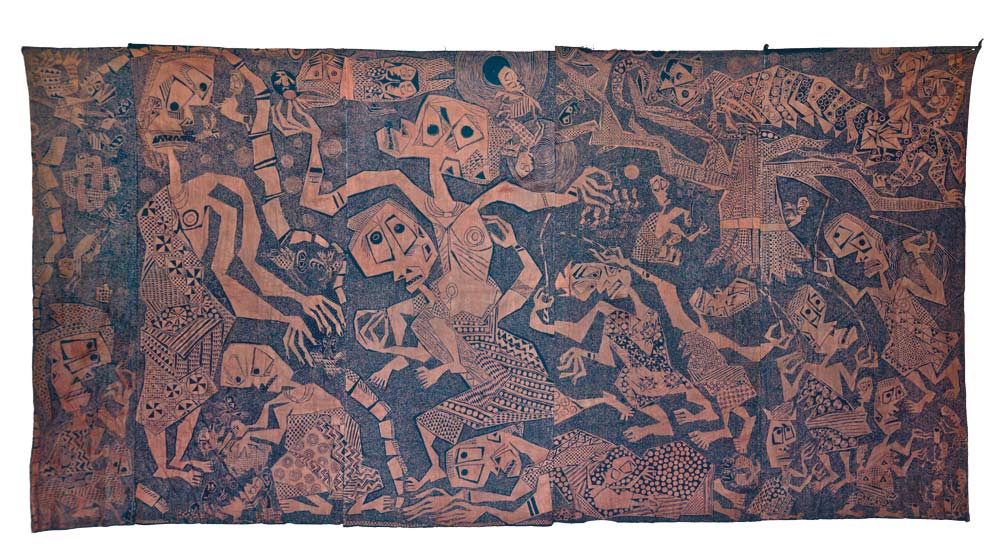 Wenger’s work influenced the artistic awakening in post-colonial Nigeria. For decades she worked with artists of the ‘New Sacred Art Movement’ on sculptures, buildings and shrines in the Sacred Grove of the river Goddess Osun in Oshogbo. Her intense efforts saved this refuge of traditional religion from deforestation, and in 2005 it was declared a UNESCO World Heritage Site. Today Osogbo is considered a place of pilgrimage for the followers of the Orisa, Yoruba deities who have many adherents in the Caribbean and America since the time of slavery. Wenger’s house is still open for visitors as a museum at Ibokun Road in Oshogbo.

After 1985 important exhibitions of Wenger’s art took place in Europe. Wenger returned to studio work. In 1990, in addition to painting, she concentrated on drawing. The Philo Manifesto and the Palimpsests can be seen in numerous versions in unpublished sketchbooks. Compacted in many layers, the sprawling text becomes almost illegible; words become images and give an insight into the creative world of the artist. These pages form a bridge from later works in Osogbo to the early landscape drawings in Styria. Trees and rivers shaped the life of this extraordinary artist and pioneer of emancipation.

Susanne Wenger’s life took place between cultures and is highly relevant to the concerns of our day. She had an unshakeable faith in art as a meaningful and unifying element between all human beings. Her commitment to environmental protection pointed the way. In her turn to transcendence, she said ‘art is ritual’, but she remained pragmatic and always emphasized that ‘I am above all a modern artist’.

On the occasion of the exhibition a limited edition of graphics containing three selected works by Susanne Wenger is published. The exhibition is showing the painting Golden Ritual for Olorisha Ajagemo (1955), on loan from the art collection of the State of Lower Austria, for the fist time. A video by the artist Dunja Herzog puts Wenger’s poetic works into a contemporary context.

About the Susanne Wenger Foundation:

In 2011, with the support of the Provincial Government of Lower Austria, the Susanne Wenger Foundation was inaugurated in the Krems Art Mile. The Foundation aims to provide scholarly documentation of Susanne Wenger’s legacy and make it accessible to the public. Regular exhibitions, events and guided tours afford information about the artwork of this exceptional artist. The Austrian Foundation works closely together with the partner institution in Nigeria, the AOT Adunni Olorisha Trust.