Ooni of ile- ife, Celebrates Osara the Goddess of the Lagoon

The Ooni of Ife His Imperial Majesty Ooni Adeyeye Enitan Ogunwusi (Ojaja II) on Saturday evening led a multitude of Ife sons and daughters to the ancient shrine of the OSARA deity on Moore road of the town regarded as the ancestral home to the Yoruba for the annual celebration of OSARA festival.

Ooni Ogunwusi who arrived the venue of cultural festival accompanied by his beautiful queen Olori Wuraola Ogunwusi(Ojaja II) was received by the deity’s Chief Priest, Chief Isola Ogunwusi and an extremely excited waiting crowd who were there to witness the just resuscitated festival after a long period of neglect.

The Arole Oodua during the event acknowledged OSARA the goddess of Lagoon as a messenger of God just like Olokun the goddess of Ocean sent by the Almighty God alongside the other 400 spiritual beings(deities) to form the pre-genesis esoteric world called IFE OODAYE destroyed by the flood(Noah) succeeded by the second world called IFE OOYELAGBO from where the land expanded globally. He thus described her as loving wife of Oduduwa and a caring mother who always showed love not only to her children but also to all other children in the community. 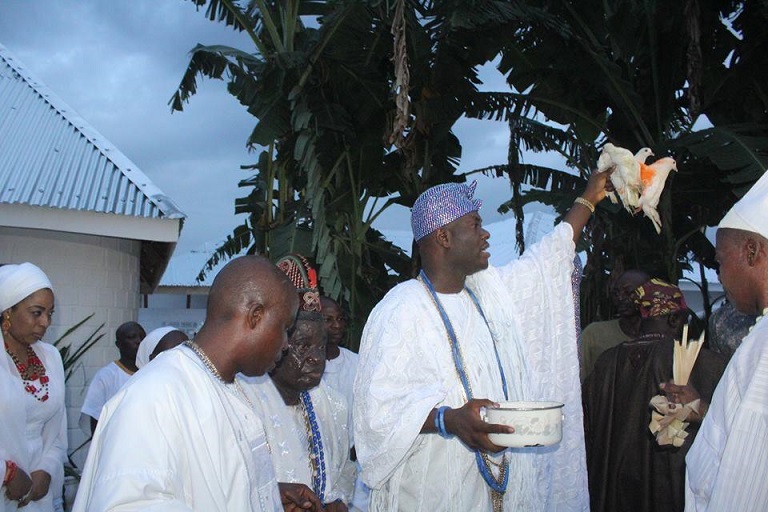 According to the African foremost monarch, refereed to OSARA as the mother of all the Yoruba through Okanbi her son explained her and Olokun to be arch rival queens in the palace of Oduduwa which is why the two waters(Ocean and Lagoon) don’t meet without a turbulence till date.

The high point of the festival was when the OONI flanked by his queen and the Chief Priest came out of the inner chamber of the shrine believed to be the source of the Lagoon with a few doves and a bowl of water in his hands with which he prayed for the blessings of Ile-Ife and the entire black race. He sprinkled the water on the people while they all struggled for the water to drop on them as he walked with the people through the street of Moore to the palace ILE OODUA. 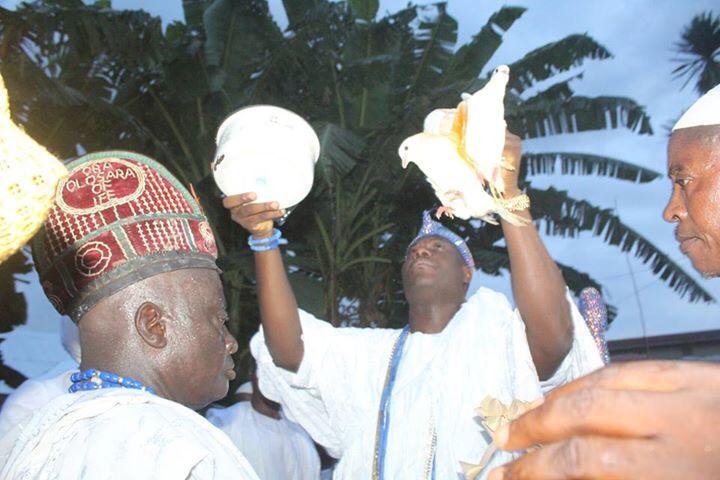 Meanwhile, Ooni the Keeper of the Seal of Yoruba had earlier in the day attended this year’s Gbongan Olufi Festival Celebration at Gbogan in the State of Osun where he was welcome by a soft downpour immediately he stepped out of his Rolls-Royce phantom 2016 at the venue. Oonirisa who arrived with his usual glamorous entourage at about 5:00pm to a loud ovation to celebrate Olufi festival with the people of the ancient town of Gbongan met His Royal Majesty Oba Adetoyese Oyeniyi Odugbemi I, Olufi of Gbongan who also rose on his feet to greet him.

At the event, Arole Oodua asked the people of Gbongan to see themselves as propitious, he prayed for them and later asked those present at the festival to come out of their pavilion into showers for the downpour symbolized blessing and good fortune for all, describing it as not just a rainfall but a divine positive coincidence as a sigh of Osara day being marked in Ile-Ife which just rejuvenated after a long time abandonment and enjoined the people not to let go of their ancient landmark.

Surprisingly, the downpour which continued while the festival progressed suddenly stopped as Oonirisa stepped back into his Rolls-Royce to proceed to Ile-Ife for the OSARA FESTIVAL.
Credit: Director of Media and Public Affairs Ooni’s Palace

10 Superstitions that Could Get You Killed as a...