Osun Oshogbo festival is one which has attracted tourists and culture buffs to the re-enactment and re-awakening of the age long tradition of the Oshogbo people- a medium sized city in the Southern Western Nigeria, and her African cultural heritage spanning from over 400 years.

The name Oshogbo was coined from a Yoruba inscription “Oso-Igbo”- the custodian of the forest. According to early history, “Osogbo is a legendary account of the spirit world. The “Oso-Igbo”, a queen is the beautiful goddess of the Osun River and the original founder Oshogbo- a dense forest housing the Osun sacred grove on the outskirt of the rain forest. She was said to have lived in a beautiful surrounding and possessed magical powers which inspired her people and frightened her enemies.

The annual celebration of this powerful goddess ascribed with the rare power of healing, protection and fertility, in its usual manner attracted a huge traffic of tourists from Africans in the diaspora with the intent of reconnecting to their root(s) as they join the people of Oshogbo in their communal identity that reflects in the strong bond that exists among the founding fathers of the town and its celebrated cultural heritage.

Over the years, tourists from Brazil, America, Britain, Australia, Cuba, China, Argentina and other European countries have increasingly undertake annual pilgrimage to the historical celebration and apart from the traditional worshipers, the aesthetic view of landscape of the grove dotted with sanctuaries and shrines, sculptures and art works erected in honor of Osun and other Yoruba deities were enough attractions for the ever increasing traffic of pilgrims during the spiritual, historical festival. 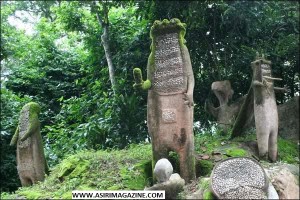 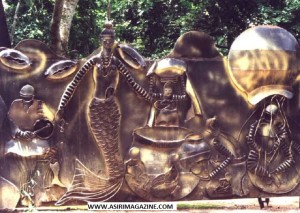