The Goethe-Institut in Lagos is located right in the middle of what’s known as the Brazilian Quarter, a district reminiscent of the old towns in Rio de Janeiro or Salvador-Bahia, which was constructed in the 19th century by a group known as the Retornados, i.e. former slaves who had returned from Brazil, made up more than 10% of the population around 1880 and would soon become part of the city elite and continue to bear Portuguese names to this day.

To the Retornados,called Amarôs or Agudas in the Yoruba language, Africa represented a promise – the promise of a return of history and of mercy.Their origins lay not behind them, rather before them.

Constructions by Brazilian master-builders such as Water House, Ebun House or the Shitta Bey Mosque and other landmarks in old Lagos now scarred by the ravages of time, clearly cling to a past that is in danger of being swept away by the megalopolis and its 22 million inhabitants. 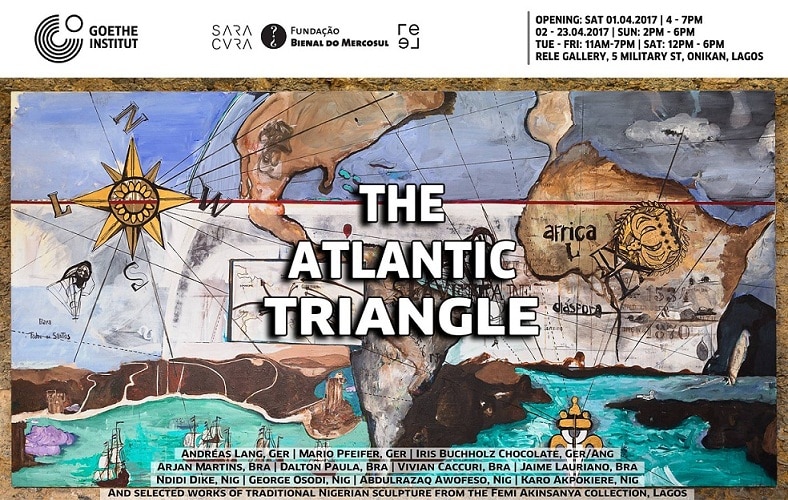 On the far side of the Atlantic, in Rio de Janeiro, construction work for the Olympic Games unearthed the foundations of the former slave market at Cais do Valongo, where more than one million slaves were sold between the 16th and 19th centuries.

The Brazilian Quarter of Lagos and the old slave market in Rio form the axis known in English as the Black Atlantic, a complex tapestry of centuries-old political, economic and cultural components on both sides of the ocean, stretching from Rio de la Plata to New York and from Dakar to Cape Town. Strictly speaking, this geographic area should also include Europe, which established the slave trade and profited handsomely from this transatlantic triangle.

In cultural terms, the Black Atlantic and its diaspora were without doubt extremely productive for they forged a colossal process of creolization, which led to intense exchanges of and between religions, languages, technologies and the arts.

The exhibition is less about the historical reconstruction of the conditions of exploitation than a contemporary and timely configuration of the cultural dynamic and interdependence within this delicately balanced triangle.

The exhibition is part of a larger project which includes shows at Saracura Art Space (Rio de Janeiro) in June, 2017, as well as the 11th Mercosul Biennial in Porto Alegre (Brazil) in April, 2018.

And selected works of traditional Nigerian sculpture from the Femi Akinsanya collection, Lagos.