The Aroma of Verses: A review of Samuel Osaze’s Aroma of a Burning Bush

Samuel Osaze’s Aroma of a Burning Bush seeks to explore national, social and popular issues in his debut collection of poetry. The book opens like an epilogue with a commentary by Reginald Chiedu Ofodile. This commentary impresses upon the reader Ofodile’s postulations on the book. In my opinion, the book leaps into several prisms of meaning that do not necessarily conform to the intellectual remarks of Ofodile. This is what makes Osaze’s Aroma of a Burning Bush a splendid collection.

The poet’s style is in free verse which serves the content and the imagery of the collection. There is no form to fire and there are different forms of fire. It is within the tensions of fire and aroma that the poet considers the environmental and socio-political as well as the emotional, sensual and philosophic verses in no strategic order. Nigeria becomes the land torched by forest fire without a face to claim responsibility. The political class convolutes into a reductionist slave driving class that deprives their ‘animals’ of food until they can no longer bear the pain, yet protest is caged.

You muzzled the mouth of the horse
That does gently tread the corn?
Afterwards you cast out seeds
Like a charmer after a hen (10)

For the poet, the Nigerian citizen is trudging the desert without a ‘Moses’ and without a ‘promised land’. The people rely on flashes of hope that are packaged as lies on their necks of fantasy, while the wealthy drink from the source of thirst. Here, the imagery of selfishness is apt. The poet assumes the voice of the silenced and the mummers, he hopes that words which constitute the nationhood can be used to reconstruct its ruling class. Poems like To the Slave Driver (10), Gnashing of a Nation’s Teeth (20) amongst others are political poems that cut a trope for second and third generation poets because of despotic governments in the country. Nevertheless, new democratic circumstances have led many into a more profound dismay. This is the reality that the poet reinvents with the apt metaphor of contrasts in the history of Nigeria. The fact remains that the people are disillusioned as leaders have not kept their campaign promises instead they have enriched themselves with mansions overlooking shanties in places like Kaiama, in the poem, Kaiama 2010 (27). 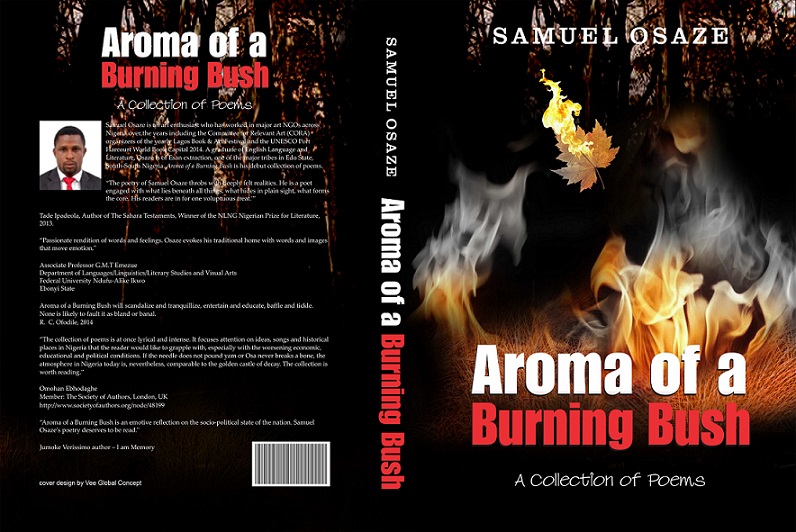 I am particularly impressed by the poetry of performance in this collection. These poems such as After the Dance (21), Upon Seeing an Esan Maiden Dance (30), The Last Dancer Takes Over Arena (31), The Prophets of Fire (33), Bird of Sorrow (36), and Sanitary Priests’ Chant at Okede (48).

After the Dance hints at the motivations for celebration by the political class who steal from the land leaving the people bereft of wealth and purpose. The motivation for the dancer is money yet underdevelopment stares everyone in the face. Osaze eases the tension of the reader with the dexterous use of performatives.

The ‘Prophets of Fire’ speaks of the clash of the times, between tradition and modernity, between ritual and reverence, between the chants and the hymnals. ‘Bird of Sorrow’ is profound as it recalls the expectation of the people of the country during independence and describes the country as a man with stroke, helpless and slow. Nigeria is the ‘Okporunwanvie bird’, it is a sluggish bird that brings bad omen to the doorsteps of people, and it is a bird that has no sense of responsibility to the harmony of life. Sanitary Priests’ Chant at Okede (48) is a poem of procession that recognises the sacrifice of plants and animals in the cultural production of mankind. Most times, these cultural nuances are formed and established to the detriment of plants on the pathways and animals in their homes. The poem is also a prolific re-invention of great poets like Okigbo.

With well-rounded waist
Clad in beads of rioting colours
to worship in the
limpid looks of your watery waves
where strange trees wage wars
with their horns
to ceil your house;
tarred roads of the
ancient mongoose,
the familial birds,
maestros that whistle our songs
when the weight shuts the blinds
of the eyes, lame

‘My Pastor’ is a short poem. It envelopes the character of  Nigerian Pentecostalism, where the words are not in tandem with the moral and spiritual principles of God’s word. BHS 1998 (28) is an outburst of tribute to comradeship as against tribalism. Punch the Air at my Coming (39) is a song by a persona-in-Diaspora returning home. The poem relies on the trajectory of ancestry and the expectant celebration of a long lost son.

Head on the Anvil (46) and Dance of the Dead (47) are poems of memory. When Rain Came (52) and To A Stream at Apata, Ibadan (54) are poems that tell of the struggle between vegetation and concrete modernity. The poem ‘Aroma of a Burning Bush’ (42) from whence the title of the collection is derived juxtaposes the sacrifice of motherhood and the urgency of existence under deplorable infrastructure as a result of greed in continuum. It also speaks to the fundamental truths of the changing times where innocence caves under the fire of selfishness. This follows a Tribute to the author’s late mother in I heard the Knell of your Going (59), a poem that captures the idea of foreboding, of the inevitability of death and the conception of personal heroes in the pantheon of ancestral gods. Osaze’s poems also venture to the personal as he gives tribute to his mentors, Jahman Anikulapo, Co-curator of the Lagos Book and Arts Festival and Chair of the Committee for Relevant Art, and Eriata Oribhabor, a writer and editor in A Stage for the Sage (82) where he argues that money does not make a great man. This poem serves as both epilogue and nostalgic resonance for the poet.

There are also romantic and sensual poems. These poems woo, they seduce, and pay homage to beauty and character. What the Older Goose Knows (57) tells a young goose to employ the Sankofa principle; why would one fail in making hay with a young and prospective lover, when there is an older Goose to show the way? It tells the young goose to be careful for her height of pride. What you Call Perfect Love (61) tries to define love between lovers, while Slain by my Affection (65) conjures the emotion of heartbreak. I am the String of Your Song (67), The Mirror (69), Open the Gate of Heaven (71), Fire and Water (72), Beyond the Face (75), amongst others do not compromise the vehicle of flames and fire. These poems are passionate ventilations, they are sensual and sometime picturesquely lewd. They are poems that thrive on the youth of experience gained.

I would have loved to see the poems properly categorised or segmented in order for readers to navigate the verses with a sense of interpretative clarity. I would have also loved to see a more robust imagery of the fourth sense. Nevertheless, Osaze makes up for his shortcomings with apt words, beautiful imageries and a certain narrative signature that keeps the reader glad to have picked the book from a bookstore. The poet has warmed my heart with a new aroma by bringing together a familiar dish of political poems, the conversation of local spices and leaves. The poet has lent to his poem a dessert of love poems, simple delights of life that help us exist in difficult socio -political times.

Review is by Femi Morgan.

News, Reviews, Trending The Aroma of Verses: A review of Samuel Osaze’s Aroma of a Burning Bush

MURDERER ON THE LOOSE: THE BIRTH OF LAW AND...

EMUfest Takes The Finale To LABAF At...