MURDERER ON THE LOOSE: THE BIRTH OF LAW AND ORDER IN THE COLONY OF LAGOS

In 1862, eleven years after his defeat at the five day war of Lagos with the British, King Kosoko renounced any further claim to the throne as well as sovereignty over the eastern districts and the ports of Leckie and Palma. The British colonial government also exploited Dosunmu’s relative inability to authoritatively exercise administrative control over the domain in the same way as his predecessors. Once the cession treaty was concluded, the question of the adjoining territories was taken up by the new Governor Henry Freeman.

Badagry town on the west was treated as territory that Freeman argued belonged to King of Lagos and was considered ceded by Dosunmu even though some claim was made by Porto Novo over the territory. In any event the people of the town confirmed in separate declarations and ceded the town in exchange for an annuity in 1863.Effectively, by 1863 the island of Lagos with Badagry to the west, Palma and Leckie to the east – the whole seaboard extending between them with the waters of the lagoon was British territory.The entire territory was under the authority and legal administration of the governor.

The land between the lagoon and the sea was considered ceded under the treaty, but in order to avoid the accusation of duplicity because of the heavy presence of a domestic non- export trade of slavery, it was not immediately presented to parliament as British territory. The governor considered the territories British and as having been ceded and the government never renounced any claim to the territory. 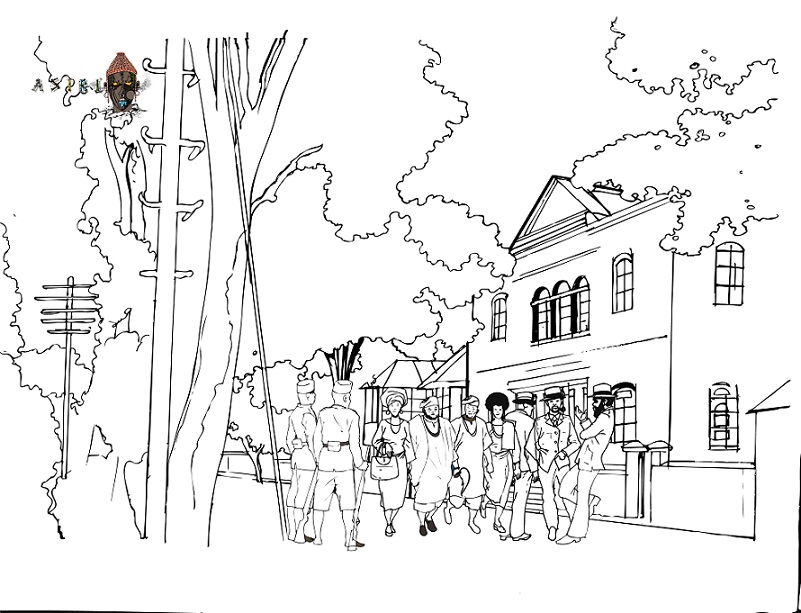 New Laws for an Acquired Territory

Having acquired the land, the British set about making the laws. The first formal legal instrument for Lagos Colony was issued on 13 March 1862, introduced by the British parliament. It was issued in the first instance to Henry Stanhope Freeman, appointing him as the first ‘Governor and Commander in Chief of the Settlement Colony of Lagos and its Dependencies on the Western Coast of Africa’. His commission required him to be the executive authority and to do all things under his command.

Soon, the basic fundamental framework for law and order which promised to reign above the rule of the local king was established and settled. In the Lagos Colony, the law arrived after executive authority but before the establishment of the courts. The law was not without flaws; it held out standards that were lower than the developments in other societies standards that would not for instance, be imposed for British domestic administration.

Murderer of the Loose: Fishing out a Serial Killer

With new laws came the framework for implementation. The emergence of the Lagos civil police was both a feature of growth and necessity to install imperial law and justice in the colony. Lagos homes were powered largely by paraffin during the day. The increasing network of streets carried traffic of horse and carriage but the narrow winding streets were largely unlit at night until 1890 with sparse gas lamps and paraffin lanterns though electric street lighting arrived in 1898.

The colonial government placed high emphasis on its armed Houssa (Hausa) force that performed external military expeditions and internal colonial suppression exercises and little policing if at all. At this time the Lagos civil police was weak and underfunded.The Lagos policeman was African, he wore a dark tunic with a belt over short trousers and travelled barefoot. He was not armed with not much more than a truncheon and a whistle. While the policeman enjoyed respect and deference on the streets there were far too few of them to police the local African community in their segregated residential areas.

On the Lagos mainland, in Ebute Metta, where the growing African workforce lived the entire district was divided into ‘beats’ for just two policemen. Burglaries and armed robberies were taking hold on the crime scene, some leading to death. In fact, by early June of 1884 the superintendent of Lagos Police, A.C Willoughby was convinced that there was a serial murderer on the loose.

Over the last year there had been increasing reports of missing women or mysterious deaths of African ladies. The most infamous recorded case was the disappearance of Mrs. Selina Cole, an African woman who was last seen in the company of her female domestic servant.

Willoughby’s searches confirmed both of them still missing after months of investigation. Further intensified interviews and enquiries led to the home of an African simply known as ‘Adeoshun’.

Adeoshun had arrived in Lagos from neighbouring Dahomey with credentials of a master healer, medicine man and traditional doctor – not uncommon for such visitors to the colony. At his home an overwhelming quantity of female clothing was found. A search and excavation was ordered leading to a startling discovery – human skeletons and property belonging to Mrs Cole! His method had been simple. He would lure unsuspecting women, charm them, prey on their superstition and rob them before the gruesome murder. Adeoshun was arrested and put on trial. The criminal justice system from police detection to court prosecution went into action.

After a four month trial, Adeoshun was convicted in September 1884 for the murder of Mrs. Selina Cole, her sister Abati and Mrs. Catherine Clegg. Adeoshun was hanged at the new Lagos goal on 9 August 1884.

The inadequacy of effective crime control led to the transformation of the civil police to the ‘Lagos Police Force’ which was created by the enactment of the Police Ordinance of 1897. The force was headed by the Commissioner of Police, the first being Captain J. D. Hamilton and a workforce of 153 policemen reporting directly to the Governor. A true civilian police force distinct from the constabulary to serve the Colony of Lagos was born.

‘Possessed’ by Olasupo Shasore (SAN) can be found on Konga.com and in stores (Lagos: The Hub at the Palms Mall, Jazzhole, Glendora, TerraKulture, Patabah and Quintessence; Abuja, Salamander Cafe; and Abeokuta at The Booksellers Bookshop)

Article, Featured, Trending MURDERER ON THE LOOSE: THE BIRTH OF LAW AND ORDER IN THE COLONY OF LAGOS

The Aroma of Verses: A review of Samuel Osaze’s...