The gates of the ancient city of Ile-Ife believed to be the source of mankind were yesterday evening thrown open as people trooped in from all over the world to join the multitude people of the sacred town in celebrating Osoosi believed to be the father of philanthropy and religious congregation for purity and sanity .

The Ooni of Ife, His Imperial Majesty, Ooni Adeyeye Ogunwusi Ojaja II during the festival proffered Yoruba traditional religion as a tool in solving the challenges of peace and love in Nigeria and Africa. 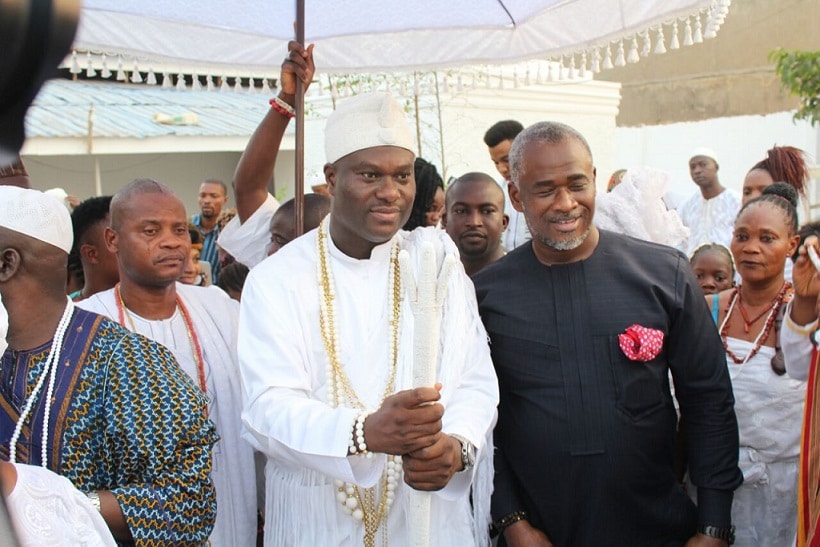 The festival was attended by dignitaries from different countries and continents in the world especially America and the Caribbean countries. He lamented that the neglect of tradition in the Africa continent contributed to Nigeria’s challenges.

For the challenge to be resolved, he said that people must develop positive attitudes towards the Yoruba and Africa traditions.‎

“We are here at the Osoosi and Obatala temples to celebrate. Osoosi’s temple is where the gathering (religious) started from. Religion should be used to preach peace and unity. We must do what we preach and the foundation must be solid. The entire black race should see this as their culture and tradition. We have to propel it well. 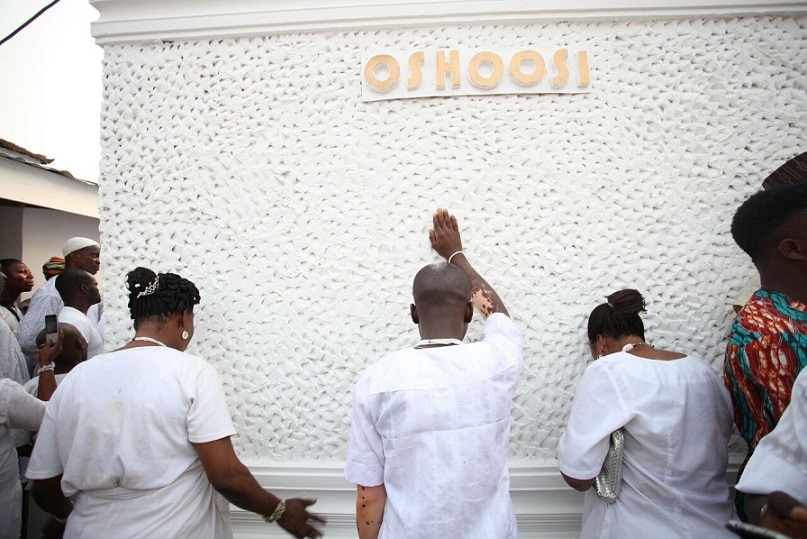 Worshipers at the Osoosi Temple in ile ife

“We are not hiding anything. We are preaching peace, unity and peaceful co-existence which is the problem of many societies in Africa. Believing in the positivity of our ancestral religion will help to solve all these problems.”

He narrated that most of the world’s religions have ancestral linkages, saying that religion must be a tool to defend the oppressed. 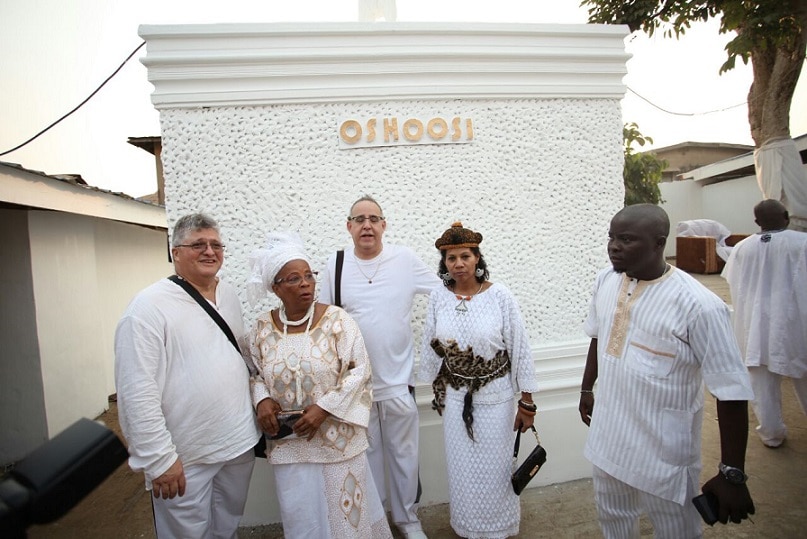 Devotees at the Osoosi Temple

The Imperial Majesty explained that one of those things that made Osoosi’s temple unique was the succour that people get when they visit it.

He said, “The guardian that Osoosi used was called ‘Ka to ka ki ki ki, ka fi enu re so le’ in which catholic and catholism came from. It is the congregation that led to Christianity, Judaism, Hinduism and Islam; many other religions started from here. It is the house of God. What they do here is to take care of the less privileged people, the downtrodden, the oppressed, and people that are low in spirit and that has been happening up till date.
‎
“But when westernisation came, all the cultures and traditions were bastardised. People were made to believe that they are not good things. What we do basically is nature driven and we want to showcase to the world that indeed everything started from here.
‎
“Osoosi came to this world thousands of years before Jesus Christ and Prophet Muhammad (SAW) came. It is one of the early creations of God. We need to showcase our culture, nobody can do that for us. We need to let the whole world know.” 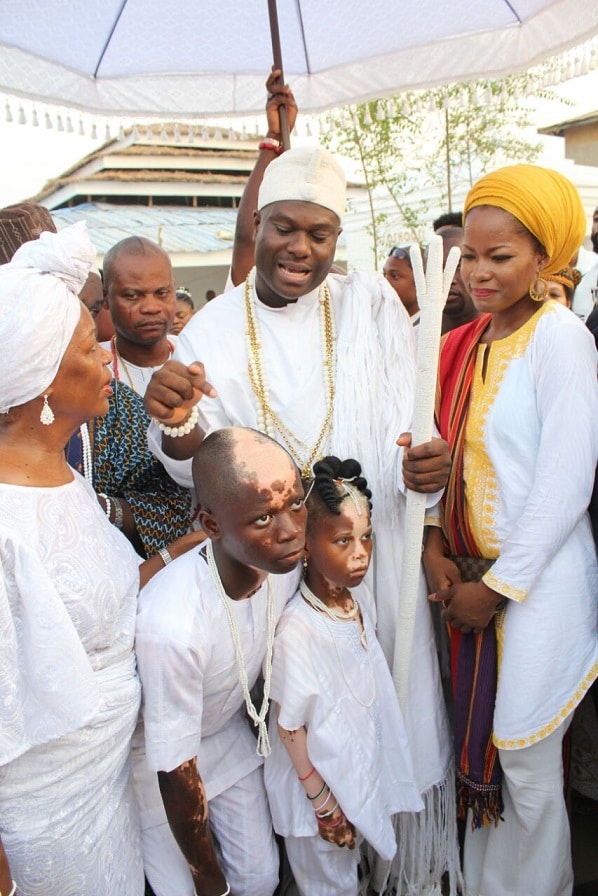 He also likened the Osoosi’s feature of not bearing children to the Catholic pope’s restriction from marrying.

“Just as Osoosi destined not to giving birth to children, so also is the popes at the Roman catholic. There are many good things from the African religion and those in Rome can not dispute it,” he added.
‎     On his part, the Obalesun Obatala Agbaye, Oba O.O. Daada, asked Nigerians to value their traditional and cultural heritage, describing the traditional religion as the most genuine and non-deceptive.

“Our culture is genuine, non-deceptive and it is the origin of every religion in the world. The multitudes of the earth
perpetually reach out to God(Olodumare) by congregating and supplicating, be it Christians, Jews, Hindus, Muslims
African ancestral worshipers etc. Osoosi, a skillful hunter and guardian of Obatala(the deity of purity and sanity), he
was a junior brother of Ogun( the God of Iron). Osoosi had a slave called  “KATO-KA-KI-KI-KI-KA-FENU-E-SOLE who painted Osoosi’s house white(efun) to depict God’s purity and entertained all and sundry with singing and praises to the Almighty Olodumare. 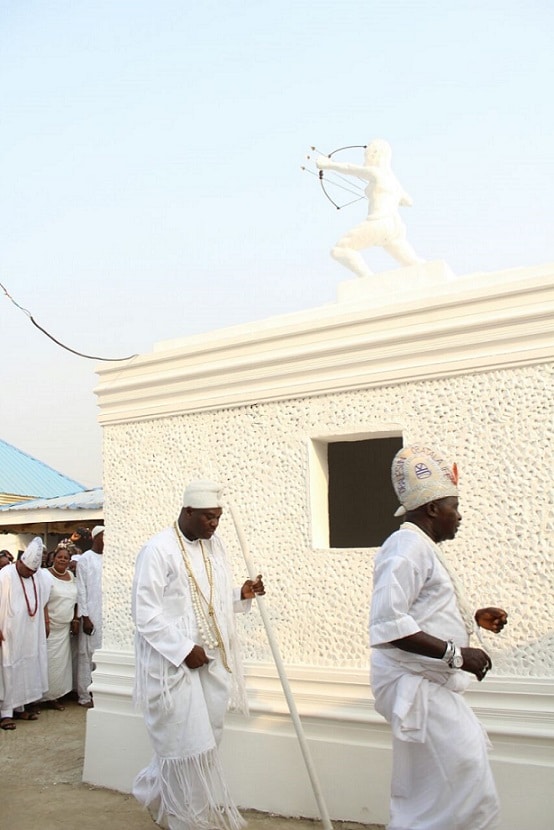 Ooni of ife at the Osoosi Temple

Under KATO-KA-KI-KI-KI-KA-FENU-E-SOLE, the house of Osoosi became rallying point of succor for the oppressed and the needy where daily fruits and food item were freely distributed. This was the origin of Philanthropy and congregational worship of god on earth.” Oba O.O. Dada narrated .

He narrated further that before Osoosi transformed into a living stone, he had decreed that  KATO-KA-KI-KI-KI-KA-KA-FENU-E-SOLE shall never marry nor have children, he prayed his house shall always host the multitudes as an everlasting abode of help and respite and that Osoosi name will forever be known throughout the world.

Oueen Diambi Kabatusuila of Kasai kingdom of the Democratic Republic of Congo also at the festival lamented that people of African origin were not appreciating their culture.

She said, “I am here to rejoice with my brothers and sisters to show that all Africans are the same. It is important to support our ancestral culture, to revive it and to show that we have to teach our children to believe in their culture, because it is in the ancestral that we can find the solution to the problems Africa is having today.”

Former MD of Daily Times and the Jaagun Oodua of Ile-Ife, Chief Tola Adeniyi said this celebration of African religion is laudable, remarkable and capable of preserving our heritage as the source of mankind.

An archaeologist, Dr. Adisa Ogunfolakan, warned that westernisation must not be allowed to erode the rich African culture saying that there are historical evidences that attested that Africa culture if practised would aid development.
‎
Iyalode Yeyefini Efunbolade from the United States said that she was proud to associate with African culture, saying her tribal marks were enough signal to state her origin even though she’s an American.

She added, “I am here to showcase the heritage and culture of the Africa. The origin of man is here. It is a honour of nature. Obatala is the diety that I hail from and I have also brought a group of priests”.
‎
An American tourist Dr Mike Lafason-Tim while answering questions from pressmen said researches have started proving that the world actually started from the tropical Africa, saying that he and other black Africans are so proud of Ooni Ogunwusi’s cultural tourism.

“This is the origin of trans-congregational worship and humanitarian doctrine of world religions especially Christianity. 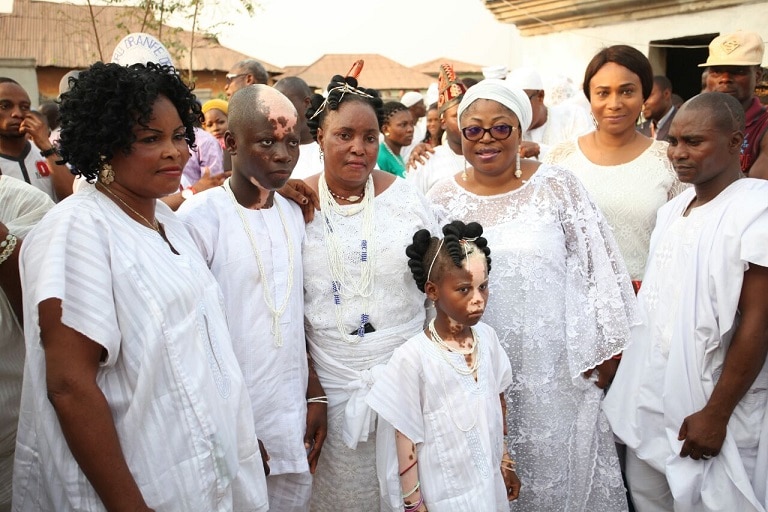 A Nigerian born American and Deputy Mayor of the city of Newark Mr Ugo Nwaokoro corroborated Dr Lafason-Tim saying that the Americans are so much in love with Ooni Ogunwusi for uniting the Africans globally through his cultural tourism revolution which he has relentlessly executed in his just one year on the throne.

OSOOSI being a deity of philanthropy and kindness, this year’s edition was climaxed with distribution of gifts like cash and food items by the Ooni who is the spiritual leader of the Yoruba race to about 1000 less privileged people who were mainly widows and the aged ones.

Events, News, Trending ‘Yoruba Religion can solve the Challenges of Peace in Africa’-Ooni of ife