‘How we are Battling Recession in Ile Ife’-Ooni Adeyeye Ogunwusi

The Ooni of Ife, His Imperial Majesty Ooni Adeyeye Ogunwusi, Ojaja II has said that the ancient city of Ile-Ife has devised cultural tourism revolution as veritable tool in battling recession reducing it’s effects to a minimal lever for his people and Nigerians.

He said this during the celebration of AJE festival (festival of wealth) in Ile-Ife on Monday attended by residents, guests and worshippers from different parts of the world who were seen praying for wealth and abundance. 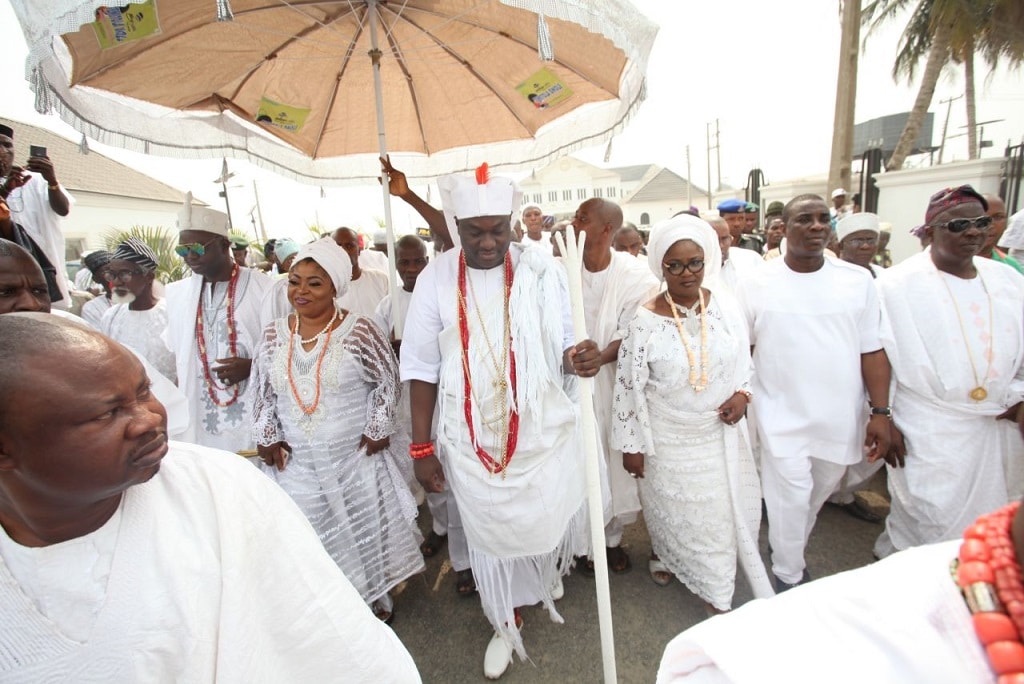 Ooni said trade by barter remained one of the best trading systems in the world regretting that Nigeria and other African countries began to have economic challenges when they relegated traditional trading methods.

To revive Nigeria and Africa economy, the Spiritual leader of Yoruba race advised that the nature should be upheld in addition to massive involvement in agriculture.

When asked if non-celebration of a festival contributed to the economic hardship in Nigeria, the Ooni said in affirmative that “It is because we are not paying obeisance to what we should paying it to. Before colonisation started, our forefathers did all these and they survived in abundance”.
He said, “We are paying obeisance to the creation of God. Aje is something that everybody craves for. If we do what we are supposed to be doing, we will be a leading country in the world as it used to be at some point and things will turn around”. 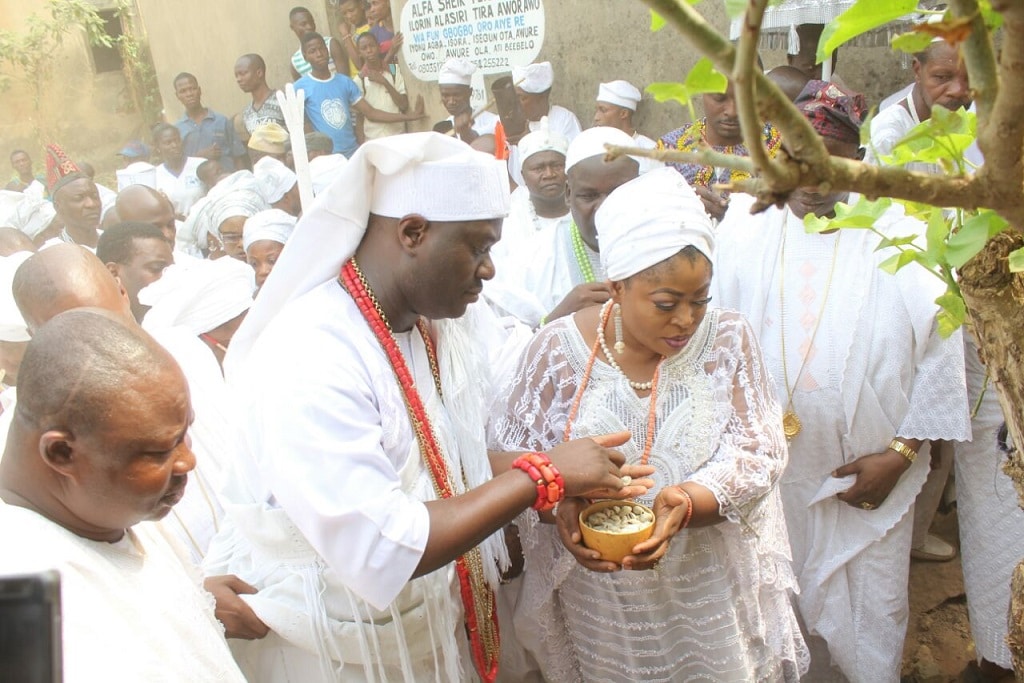 The well loved monarch added that “It is even turning around for us already in Ile-Ife. We don’t have anything that we do than worship the Almighty God and paying high obeisance to nature as mysteries created by God in which nobody can do without, that is why everything is booming for us despite the recession. We are focusing on agriculture and youths empowerment too. This is one thing other race and nation can emulate.”

The foremost African monarch concluded his speech with a brief history of AJE and Ejigbomekun MARKET explaining that “Aje(deity of wealth) is a mother and goddess created at the dawn of time sent to the earth alongside Olokun(goddess of oceans) just like God also sent the duo of Obatala as Olofin owuro kutukutu and Oranfe Onile ina.

While Aje and Olokun served and have since become the supernatural benefactors of earthly wealth for mankind, Obatala Olofin owuro kutukutu and Oranfe(Sango) Osangangan were and still remain the custodians of morning and afternoon respectively who combined efforts to build EJIGBOMEKUN market(EJI in Yoruba means TWO) with courses used as means of exchange after trade by barter. 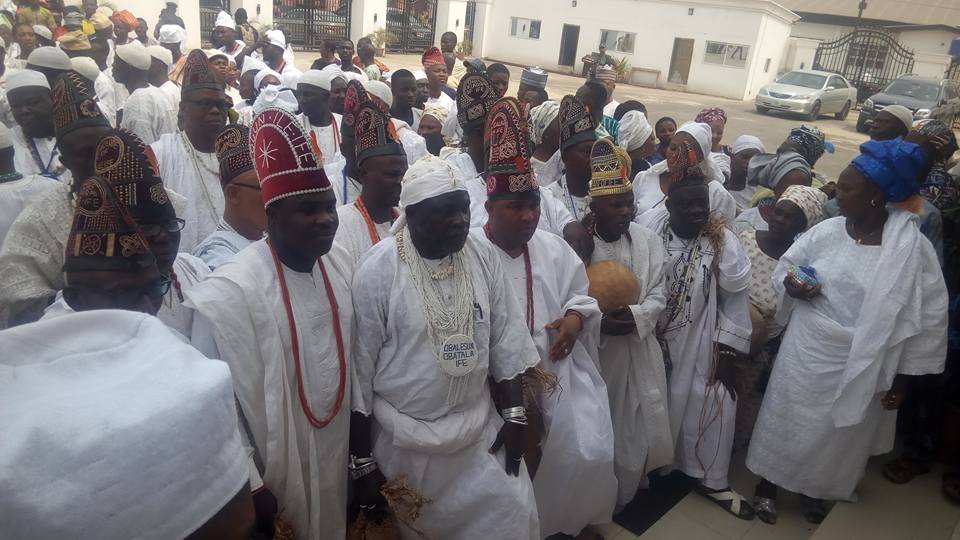 All race of the world spent the first currency in the world created by nature from beneath the sea. It was first spent and discovered at Ejigbomekun market in Ile-Ife under the administration of AJE”. Ooni Ogunwusi explained.

Iyaloja General of Nigeria, Folashade Tinubu-Ojo who led hundreds of leaders of markets from across Nigeria urged leaders in the country to use the opportunity of Aje festival to intensify efforts in ending recession in the country.

“Today is about our tradition, culture. Aje is a very important festival to boost our economy. I hope government will provide the enabling environment to keep this up. All countries have their tradition and ways of getting things resolved. Our leaders should work tirelessly to ensure that recession is not allowed to stay.” Iyaloja General said.

Popular Musician, Wasiu Ayinde (Kwam 1), saluted the determination of the Ooni Ogunwusi for ensuring that culture of the yoruba race does not perish. 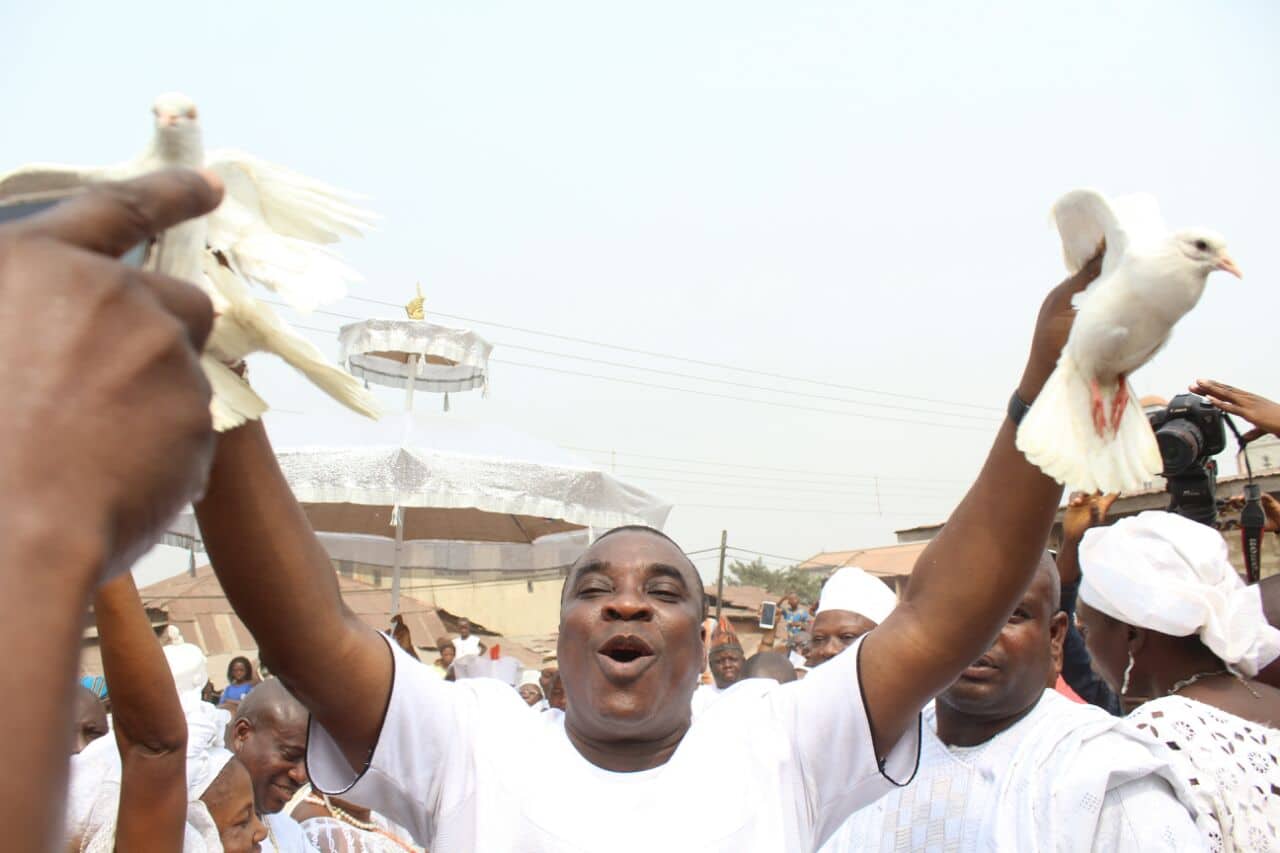 “I am here to celebrate Aje which symbolises wealth. I congratulate Ooni for being the custodian of tradition. It furthers shows the richness of yoruba culture and this should continue,” he added.

Obalara of Ile-Ife, Chief oluwagbemiga Adebayo, said the festival was used to appeal to God for the provision of wealth for Nigerians.

“When we discovered that everywhere is tight and poverty was much. We we talk to the Almighty Olodumare through Ifa Oracle and we were told to celebrate AJE . This has solution to economic recession. The shortage of fund won’t make traders sell well and every gets to suffer”. Obalara said.

Lowa Ate of Ife, High Chief Adebowale Olafare speaking on behalf of the Kingmakers described Ooni Ogunwusi as the messiah sent by God to free Yoruba from economic hardship through culture and tourism. He said the Ooni has undoubtedly within a year recorded colossal success in his revolution of culture and tourism.

“Baba is God sent, he is the messiah of our time, he has come to liberate the black race the neglect of culture and tradition which is responsible for economic. suffering. His passion to make life abundantly enjoyable for us in Ife Kingdom and Yorubaland is unrivaled”. High Chief Lowa Ate stated. 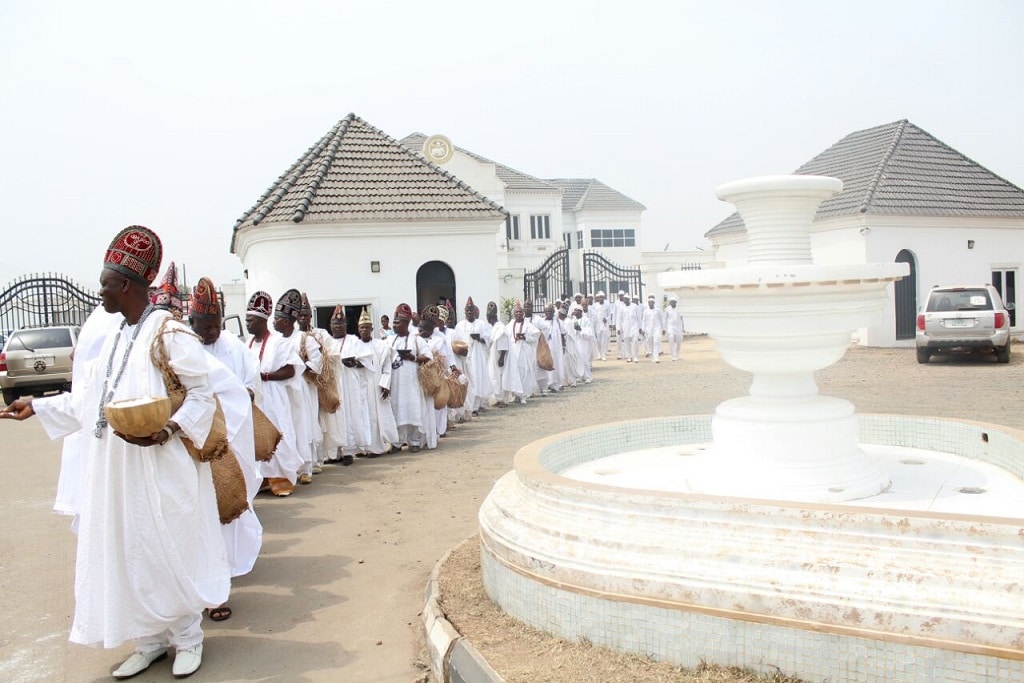 Procession of Chief Priest during the Festival

As a key promoter of AJE festival, Chief Mrs Toyin Kolade, the Iyalaje of Apapa, in Lagos and very close ally of Ooni Ogunwusi expressed satisfaction at the success of 2017 AJE festival which she said is a catalyst for the economic and commercial greater thing to happen in Nigeria. The erudite international biz woman added that “To live long, good health, you need to pay for something. The importance of Aje is beyond a mere celebration, it is a collection of all form of trading to build the economy of the nation. It is a uniting factor to wealth and an element that no one dislikes”. Toyin Kolade added.

OJA IFE(Ejigbomekun) became the birthplace for profit, wealth, business, trade, advancement and economic development. Eledumare(God) gave AJE, mother of 2 children ERE(profit) and ESU ERE(anxiety of profit) some cowries from Olokun’s pot as the first currency to trade at the market.

The immigrants later to these cowries as symbol of AJE to invoke her spirit and establish her model of trade and commerce in various markets around the world.

The descendants of Oranfe Onile ina still till today gather at the spot of AJE’s shop within Ejigbomekun market where she served as Iyaloja.

AJE is a deity associated with festivities like Olojo festival. Mankind still works for to earn a living and we toil lifetime for her in OJA IFE in Ile-Ife and globally as her spirit still answers the call of those who seek her sincerely.

Events, News, Trending ‘How we are Battling Recession in Ile Ife’-Ooni Adeyeye Ogunwusi 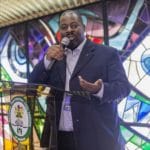