One of the main objectives of this segment #MeetTheArtist, is to bring awareness to artists doing amazing jobs in their different fields; these artists are innovators and creators of new thought patterns, creating novel artistic ideals  that will further re – define the Nigerian art scene. It will also bring attention to the underlying theme which they are set forth with; thus which is Art.

Wole Lagunju, born in 1966, is a contemporary Yoruba artist trained in graphic design at the University of Ife, now Obafemi Awolowo University, Nigeria. Wole graduated with a Bachelor’s Degree in Fine Arts in 1986. He is an accomplished illustrator, graphic designer, installation artist and painter. 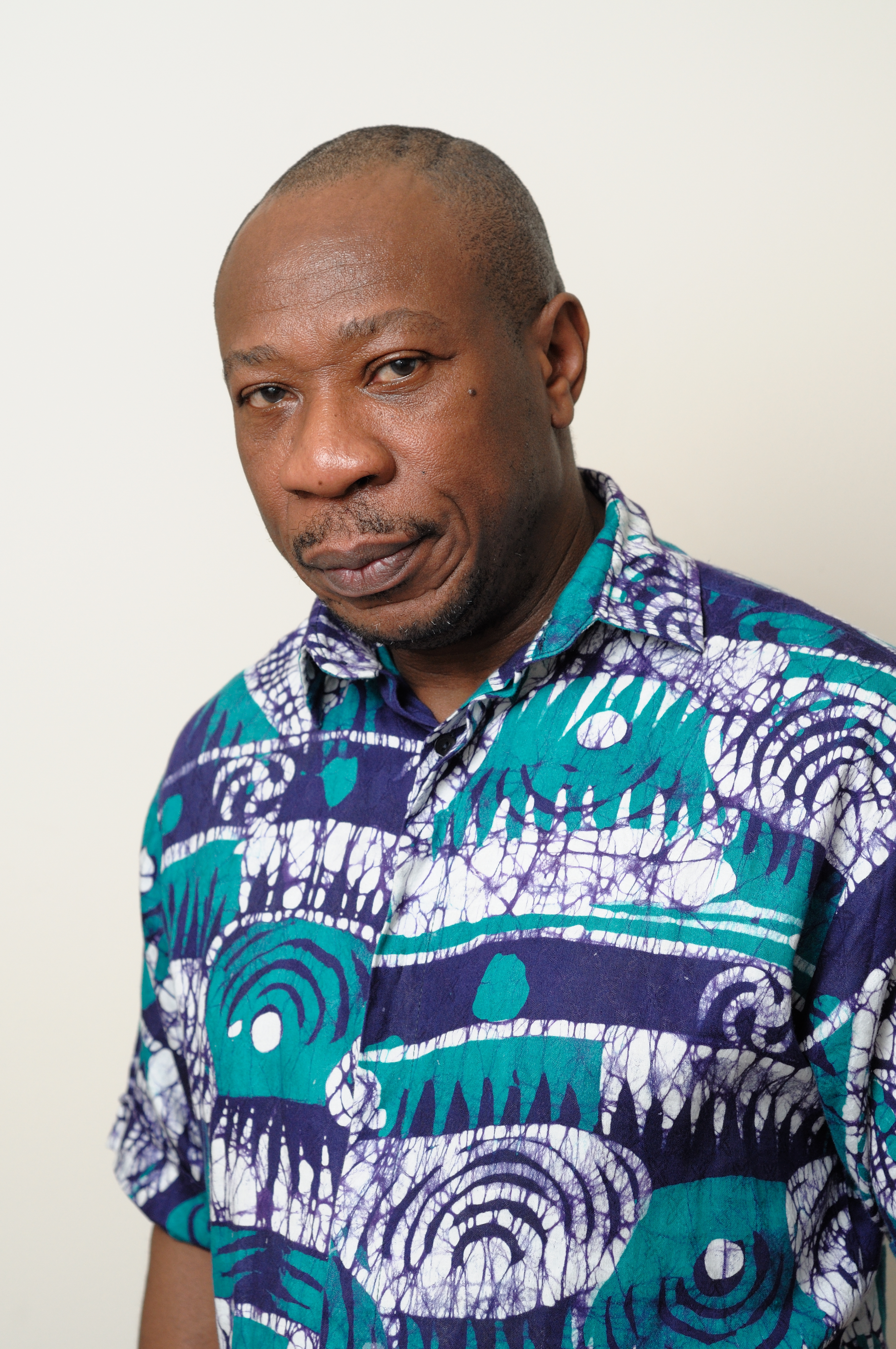 Drawing adeptly from his childhood experiences in Oshogbo and professional life in urban Lagos, Lagunju’s work is dedicated to re – imaging the forms and philosophies of traditional Yoruba art and design. His paintings and installations featuring the Yoruba adire fabric interrogates and explores themes regarding the changing nature of the traditional African market, a change that is primarily initiated by contemporary globalization while his recent series which draw upon images of the famous Gelede masks and the Victorian and Elizabethan  era, critiques the racial and social hierarchies of the 19thcentury.

Wole was awarded a Phillip Ravenhill Fellowship by  UCLA in 2006 and a Pollock Krasner award in 2009. He lives in the United States.

Wole’s background has set him on a path of cultural re-discovery. He creates patterns and designs that will channel the thought of his audience unto a new path. His obsession of Yoruba culture and art has led him to create this amazing new piece which is centered on the famous “Gelede” Masquerade.

In his statement, Wole emphasised the original theme of his art works when he said “I re-contextualized them within the framework of the Yoruba Gelede masks and other related beliefs and practices. In my paintings, I transpose the Gelede masks from the Yoruba people of West Africa unto classical images that documents bygone and prescient  social  hierarchies of  the Western world.” 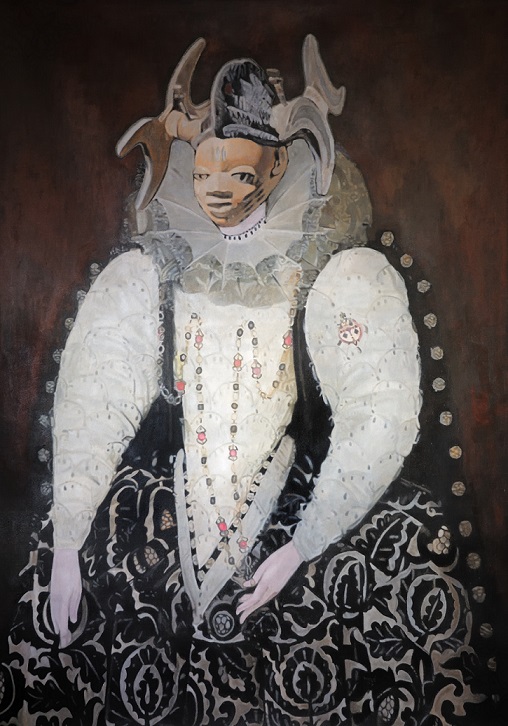 Gelede is a male oriented dance for women in Yoruba culture. The dance celebrates their  sacred powers, motherhood and sexuality. “A further line of inquiry in my paintings is how the societal values of traditional Yoruba culture are documented in indigenous iconography. These evoke  deliberations on issues  of procreation,  motherhood and femininity  when juxtaposed with  images  of  women from the modern world”

His recent work which is about the hybridization of cultures and  re – interpretation of  iconic representations of women of power in Western culture. 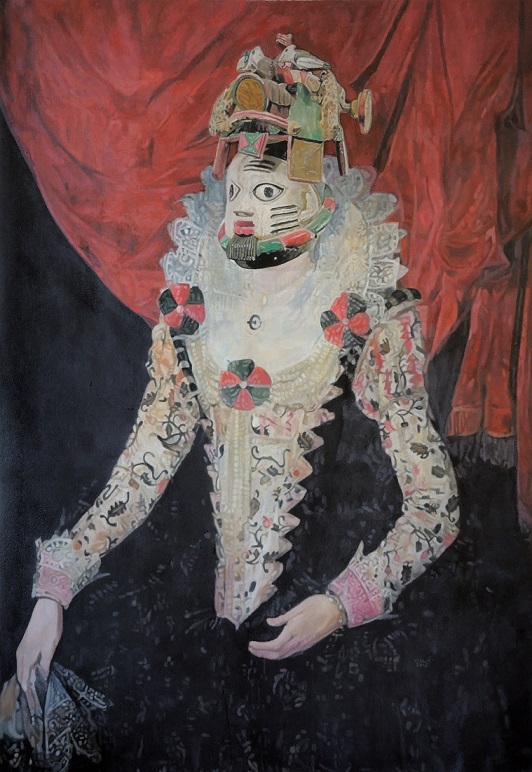 Gelede masks and dances in Yoruba society satirize, entertains and educates onlookers and the society at large. In the same vein, my paintings examine the foibles of imperialistic culture and its attendant  shortcomings. 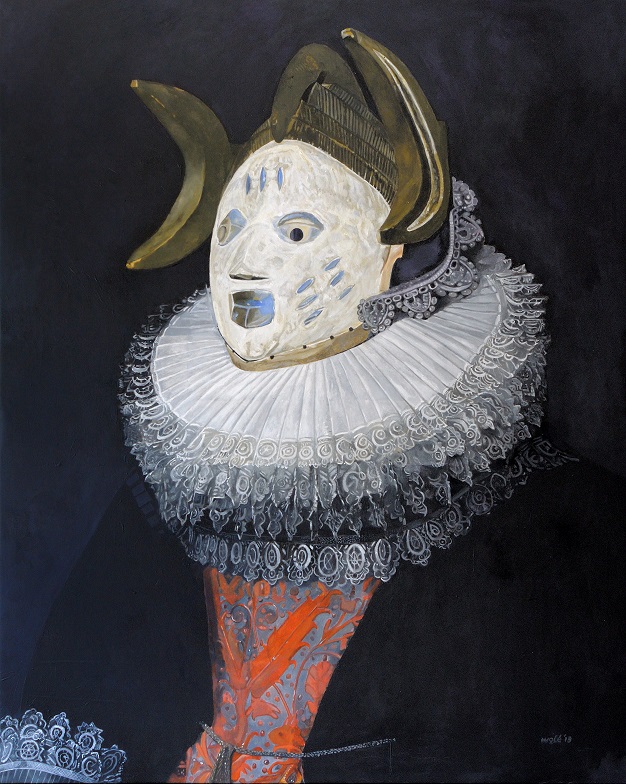 As much as Gelede celebrates the powers of motherhood in Yoruba women they are also a salutation to their personal physical attributes and endowment. This is found in the meaning of the word Gelede itself. Ge means to ‘pet or tenderly deal with’, ele refers to a woman’s private parts and de, ‘to soften them with gentleness’. 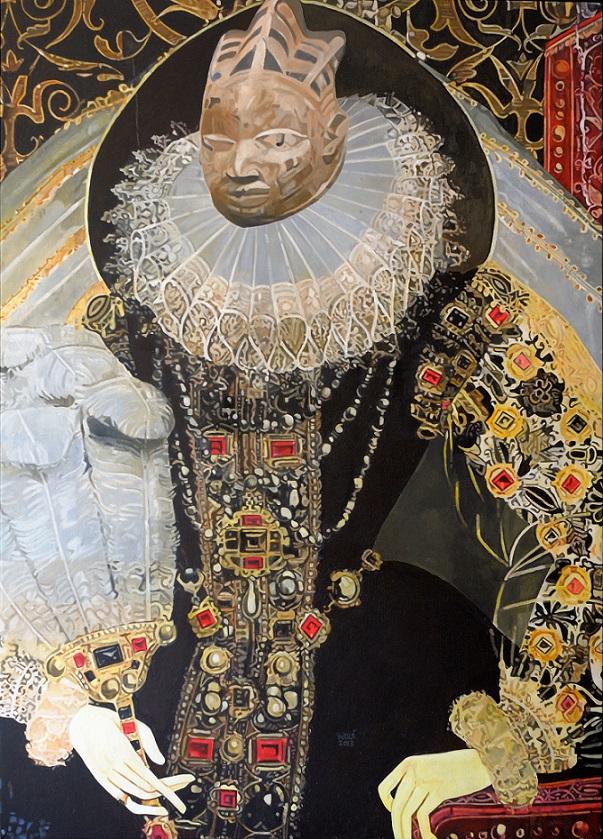 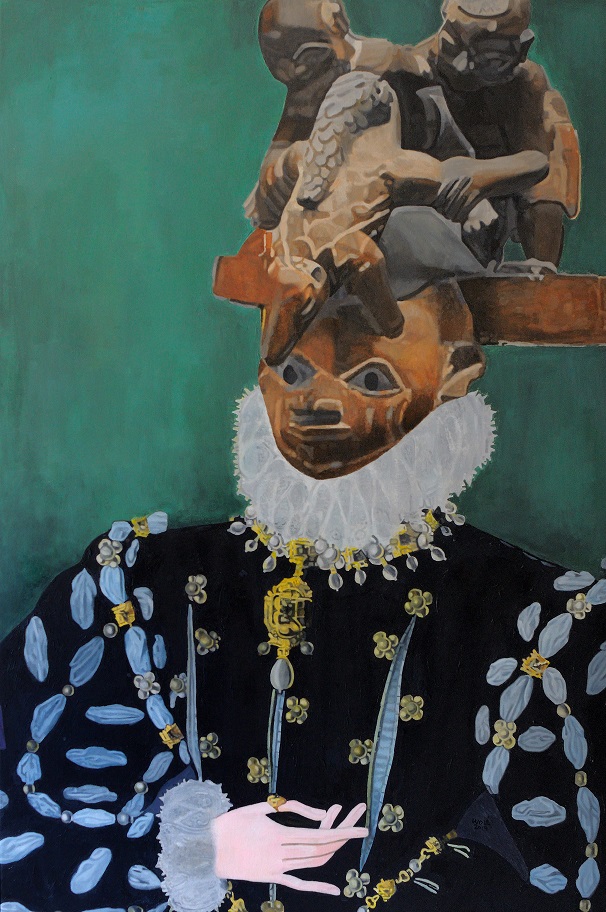 His main objective of creating  these  composite  images of women and Gelede from these two eras,  is to challenge and critique  notions of  imperialistic cultural idioms, values and stereotypes that generate   assumptions of a dominant cultural prerogative and singular historical perspective within issues of power and gender and identity.